Men of letters meet up in Istanbul Poetry and Literature Festival 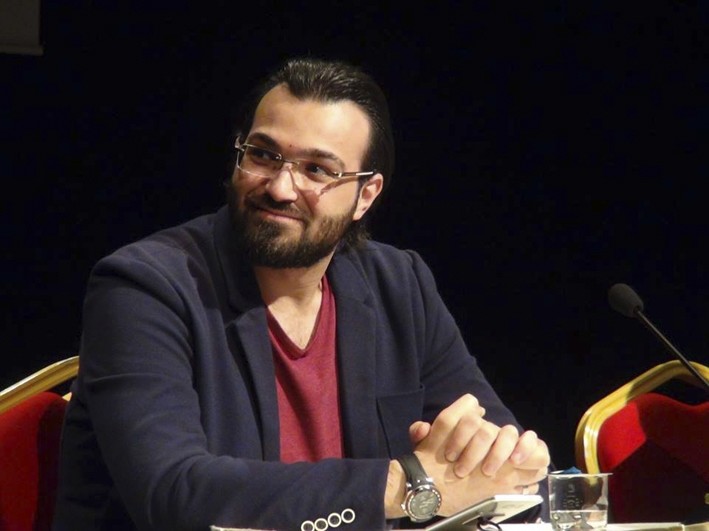 The International Istanbul Poetry and Literature Festival brought men of letters from around the world in the heart of culture and arts in Turkey. Daily Sabah interviewed two young and accomplished poets who came from different backgrounds

The International Istanbul Poetry and Literature Festival opened its doors last Thursday and came to an end today, on Oct. 2. While the festival was happening, Daily Sabah was able to interview two poets, or as they say "two students," from two different and tough locations in the world. A Syrian refugee who was deported from Lebanon to Turkey in 2014, Mahmoud al-Taweel, and Naida Mujkic, a Muslim Bosnian women poet. The stories of these two poets from different facades of life say many things about their lives, work and Turkey.

A rebel with a cause from Syria

Born in Damascus in 1989, Mahmoud al-Taweel always had trouble with the al-Assad regime and the injustice it caused. Even though he tried to write his poetry and his works have been translated into English, Italian and Turkish, he was banned from writing poetry by the regime in 2009 in Syria. Even though he studied marketing, he was born into a literate family and was able to learn Muslim and Arabic literature at an early age. He has learned passages from the Quran and other Arabic literature, which helped improve his Arabic language skills.

Even though he started writing poetry in 2006, his first poem recitation was organized in his name in 2008. Then in 2009, he was accused of provoking people to rebel against the regime and then, his work was banned by the Syrian police forces and afterwards, he continued to write poetry but not publicly.

In 2010, a few months before the Syrian revolution, he also adopted two theater plays. While banned in Syria, his poems were translated into English and Italian in 2012.

He has been imprisoned three times by the Syrian government, yet he continued to do various publications, even sometimes through radio, after 2013 in regions that were not ruled by the Syrian regime.

In 2014, the Lebanese Hezbollah invaded his hometown in the neighborhoods of Damascus, where he travelled to Lebanon but was jailed by the Hezbollah and then, even though he tried to get back to his country, he was deported to Turkey from Lebanon. He then tried to go back to his homeland ruled by the Syrian regime but was unable to.

When we ask him where he is residing now, his reply was, "Şirinevler," so now he is currently living in the Şirinevler district of Istanbul. Currently, he is working as the production coordinator for a Syrian TV, Orient, and additionally, he is writing for various Arabic magazines on different subjects and continuing his work in poetry. He has also been presenting his work in various literature festivals around Turkey.

A female poet in a 'man's world'

It's hard to be a woman in literature but probably harder if you are raised by a İmam grandfather. Born in 1984 in Bosnia, Naida Mujkic chose her profession, thanks to her father who is also a writer, at an early age. She studied "Theory and Practice of Postmodern Literary Study" and defines herself as a "postmodern" poet, though she highlights that she will never become a poet but will always be a "student."

Even though, she has two books out and her third book "Saffron" came out about a week ago, she has suffered a lot in the literature world dominated by males, yet she manages to survive and delight at it. She has been working on exploring the relationship between her country and Austria, where there are deep roots planted and her latest book is part of her project when she took residency at Vienna. She also notes that the book includes Turkey as well as influences from Europe and Bosnia.

She is not only a poet but also a teacher and a writer. She gives classes on literature in Bosnia and is highly enthusiastic about it, plus she also writes for some cultural magazines in Bosnia. She also noted that she will write about this Festival when she gets back home!

But everything else for her is just work: Poetry is what lies at her heart.

Even though her father studied Literature, in the former Yugoslavia, he couldn't finish his degree but Mujkic got into the literature world thanks to her father and his extensive library. She wanted to study literature to see if the faculty can help her become a better poet. Did it? "Yes, everything helps. I'm not a poet. I'm a student," says Mujkic.

She complains about how poetry is underestimated now, and even though it was a very higher job a century ago, these days no one reads poetry and poetry doesn't sell anywhere.

Mujkic also noted that until the 1970s there were almost no women writers in Bosnia and "it's hard to be a women, but even harder to be a female poet," said Mujkic. She also said in her last book, the one before Saffron, she wrote about not only the war that happened in Bosnia but also what has been going on around the world, such as what happened in Crimea, and some of her male colleagues told her to write about women things; such as cooking and diapers. Yet, Mujkic is not such a woman.

She always thought of Bosnia as the fore-frontier, the most Western city of the Muslim world, yet, in Istanbul she didn't get a Western feeling, but then realized that maybe not in Anatolia but in Istanbul, it is extremely multicultural. She also noted that she has seen "Once Upon a Time in Anatolia" and realized that not all of the country will be the same. She describes Istanbul as the "Vienne of the East."

She teaches Ottoman literature and Oriental literature, from Sufism to XX, and describes that the everyday life here is so much different than Europe, which she describes as limiting emotions, whereas here, in Turkey, she says all of the emotions are out there.

Mujkic is inspired by every daily life, by the common people. She likes to include anything that provokes emotion in her work. When we talked about her latest books she describes it as a "language poetry," in which she had toyed with the language. "Even if a poem is on something ugly like war, it has to have to have some sort of esthetical moment," said Mujkic. She describes her work as postmodern and she tries to connect to daily issues through poetry. Let's hope her new book is translated into Turkish as we are very connected to this lovely Bosnian lady.
RELATED TOPICS