Former Ottoman palace serves as the biggest library in Lebanon 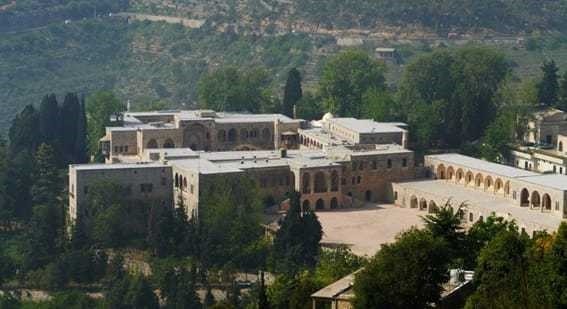 by Anadolu Agency Oct 20, 2016 12:00 am
The old Ottoman place in Lebanon's Biaklin region is offering its services as the biggest library in the country. The library hosts 140,000 books and an archive of 300,000 newspaper and magazine copies.

Located in the southwestern part of the Lebanese capital Beirut, Biaklin was once under the rule of the Ottoman Empire. The palace was commissioned by the Ottoman sultan Abdülhamid II for the then governor of Lebanon, Mustafa Arslan. As soon as visitors come to the library's steps, they are welcomed by an Ottoman code of arms.

The manager of the library, Gazi Abu Gayda, offered insights about the palace, which is now used as a library for Anadolu Agency (AA) correspondents. He explained that the palace was used for numerous purposes following World War II, including a school building, a court hall and a prison. Abu Gayda said the building was not used for a while following the Israeli occupation of the region in 1982. "Once the Israeli occupation was over in 1986, the Lebanese government wanted to turn the building into a prison once again, but the locals did not want the building to be used this way. So, Walid Jumblatt, the leader of Druze Progressive Socialist Party, had the building restored as the locals wished and inaugurated the building as a library. In 1996, the library was labeled as the 'National Library' by the Lebanese Ministry of Culture and Tourism," Abu Gayda said, adding that the library is the largest in Lebanon and is home to the historical recollection of the Ottoman Empire as well as Arabian and Islamic history. Abu Gayda explained that the locals of Biaklin maintain a great deal of effort in order to protect the historical structures in the region, adding that they also expect help form the Turkish authorities to keep the Ottoman buildings in the region on their feet.

Many of the Ottoman-era buildings in Biaklin date back to the reign of Abdülhamid II. However, some of the historical structures and artifacts in the region are in need of immediate restoration. The Hamidiye Fountain located on the highest point of Biaklin, and the graveyard featuring Ottoman-style headstones located 10 meters from the fountain, are the most beautiful examples of Ottoman architecture and art in the Biaklin region of Beirut.
RELATED TOPICS