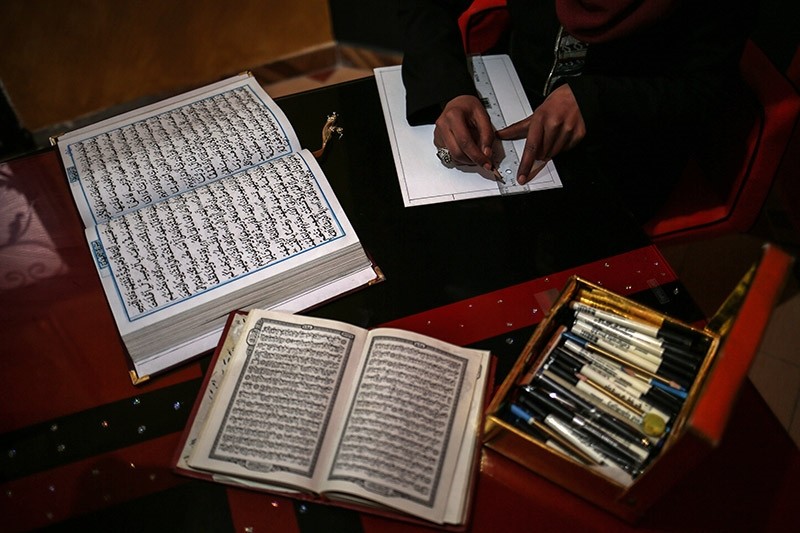 Ukkad, who lives in a town called Khan Yunus just south of Gaza, finished her copy of the mushaf three weeks ago using the painstaking line style of Hafiz Osman.

Ukkad, who said the three year long project brought her closer to God, also said that she dedicated her work to all of the souls lost in Palestine, especially the soul of her brother Nureddin al-Ukkad.

She said that she wrote the Quran for future generations, and added that simply reading and memorizing the Quran should not be enough.

Noting that she had never taken a special course on the Hafiz Osman line, Ukkad developed the calligraphy skills on her own, and used wooden pencils to avoid neglecting the edges of the pages.

The young woman said that she did not have any difficulties during the writing process, and that she was determined to complete the work throughout the three years of labor.

Hafiz Osman is considered to be the greatest 17th century Ottoman calligrapher. He was a member of the dervish order and served as the personal tutor to three sultans. Sultan Mustafa II respected Hafiz Osman so much that he would hold the calligrapher's inkwell while he wrote.

The technique of Hafiz Osman began to replace the Sheikh Hamdullah style, and during his lifetime he wrote 25 copies of the Quran. Some surviving examples of his work are held at the Topkapi Place Museum Library in Istanbul and by the Nasser D. Khalili Collection.