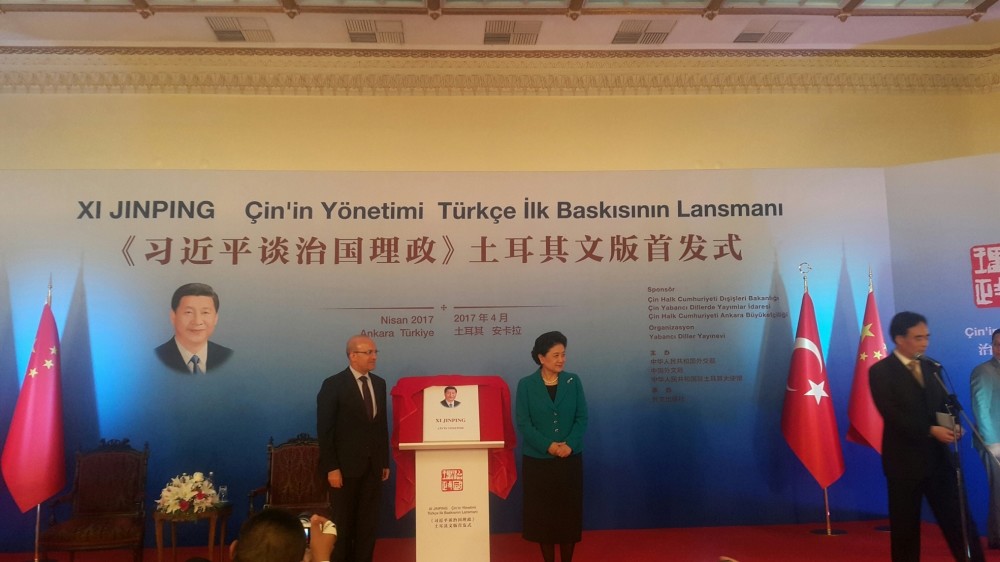 The book aims to inform the world about Chinese governmentu2019s philosophy & domestic & foreign policy. It contains information about Chinau2019s rapid development as well as Xiu2019s strong beliefs, affection for people, sense of humanism & his global vision.
by Anadolu Agency Apr 19, 2017 12:00 am
The Turkish edition of "Xi Jinping: The Governance of China," a book by Chinese President Xi Jinping, was released in Ankara Monday.

The book launch was attended by top officials of the two countries. Present at the event, Chinese Vice Premier Liu Yandong said, the book, which has already been translated into 17 languages, contains an extensive selection of President Xi Jinping's speeches, talks, interviews and correspondence between 2012 and 2014.

"More than 6.2 million copies of 'Xi Jinping: The Governance of China' have so far been printed worldwide. This [Turkish version] is an important token of friendship and cooperation between the two countries," Liu said.

She hoped that the book will play a vital role in answering many of the international community's questions about China and its development.

Commenting on Turkey-China relations, Liu said the two countries are important members of the G20 and emerging economies.

"The friendship between China and Turkey has a long history," she said.

Meanwhile, Deputy Prime Minister Mehmet Şimşek, also present at the event, said, relations between Turkey and China would grow stronger in the years to come, with high-level visits and consultation mechanisms.

"Chinese President Xi Jinping's book, The Governance of China, will be beneficial for a better understanding of China's political attitude and approaches," he said.

He said the book aims to inform the world about the Chinese government's philosophy as well as domestic and foreign policies.

"No one expected that China would embrace globalization, in a period when protectionism is at the forefront," he added. "However, China showed that it is visionary."

According to Şimşek, the concept of "China's dream" and Turkey's centennial "2023 vision" coincide with each other.

"The common point of both visions is the belief in coexistence in peace, prosperity and development. The efforts by Turkey and China are significant not only for the countries, but also for regional and global welfare and stability," Şimşek said.

The book sheds light on China's rapid development as well as Xi's strong beliefs, affection for people, sense of humanism and his global vision.
Last Update: Apr 19, 2017 1:17 am
RELATED TOPICS