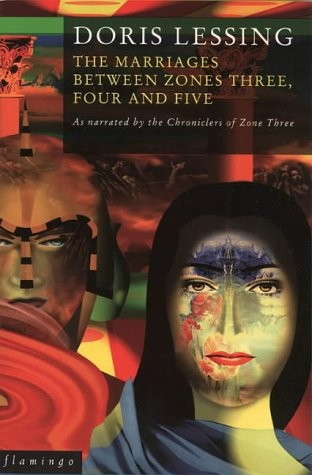 Doris Lessing, who won the 2007 Nobel Prize in Literature, questions contemporary issues, such as gender roles, man-woman relationships and different regimes, in "The Marriages Between Zones Three, Four and Five," the second book of the politic science fiction series titled "Canopus in Argos: Archives."

The book, where science fiction, fantasy and politics are intertwined, has been translated freshly by Delidolu Publishing House for Turkish readers.

The novel starts with the marriage of Al-lth, the queen of the third zone, which is a matriarchal civilization, and Ben Ata, the half-barbarian king of the fourth patriarchal zone. This marriage, which is organized by force by a superior mind called "Providers," causes many conflicts because of the differences between the genders and the zones. However, both of the zones start to change in time. Who will be the winner in this female-male struggle? The queen or the king or the providers?

"The Marriages Between Zones Three, Four and Five," which can be read separately from the series, brings together Eastern and Western cultures in a politic science fiction story, referring to names and motifs peculiar to Turkish, Persian and Arabic societies.

"The book is a feminist allegory of the relations between sexes. It is full of the discoveries of an imagination sliding into its own narration and the speed of the visual inventions with the attraction of the mysteries from the beginning to the end," the New York Times says about the book.

Doris Lessing, the winner of the 2007 Nobel Prize in Literature, is one of the most renowned and prominent authors of our age. Born in Iran, Lessing spent her childhood in Rhodesia (today's Zimbabwe) because of her father's job. She dropped out at the age of 15 and worked as a nurse and phone operator. She took part in organizations against racism in Rhodesia. After moving to London in 1949, she dedicated herself to writing. Her works mainly focus on sexism, people struggling against inequality or seeking identity under the terrifying wars and the transformation of the 20th century, and small or large-scale political conflicts. Along with the Nobel Prize, the author, having a wide range of subjects from science fiction to feminist literature, also received the Somerset Maugham Award, the James Tait Black Memorial Prize, the David Cohen Prize and the International Catalunya Prize.