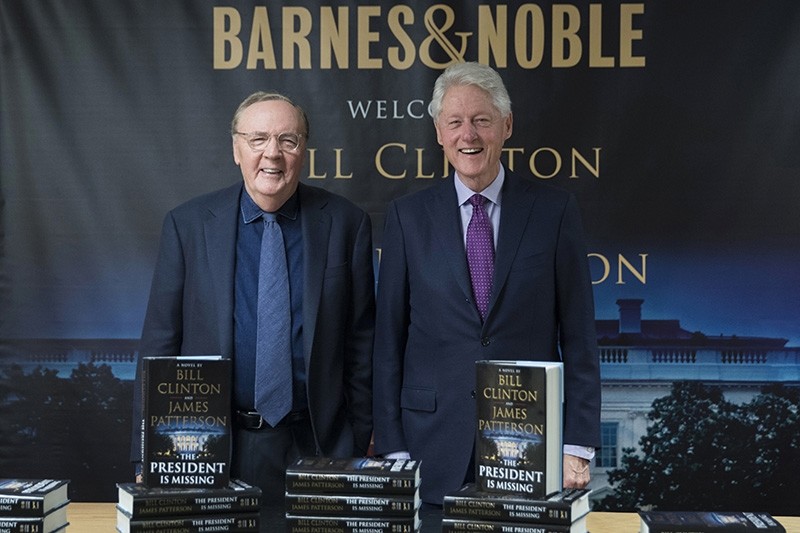 In this June 5, 2018 file photo, former President Bill Clinton, right, and author James Patterson pose for photographers during an event to promote their new novel, ,The President is Missing,, in New York. (AP Photo)
by Daily Sabah with AP Jun 13, 2018 12:00 am

Former U.S. President Bill Clinton is finding success in a field other than politics, as his debut novel topped best-seller lists in its first week.

"The President is Missing," the thriller he co-wrote with James Patterson, sold 250,000 copies its first week. Alfred A. Knopf and Little, Brown and Co., the book's co-publishers, announced Wednesday that the number includes hardcover, e-book and audio sales.

The book is officially fiction: the story of a president who disappears as he tries to prevent an apocalyptic cyberattack. But Clinton and Patterson say it's all feasible.

Prodded to collaborate by Washington attorney Robert Barnett, who handles book deals for both of them, Clinton and Patterson drew on their respective backgrounds in completing a 500-page novel that topped Amazon's best-seller list even before publication. Patterson is among the world's most popular and prolific fiction writers, and the novel is a characteristically fast-paced narrative, with brief chapters and dramatic plot turns.

Clinton, a newcomer to novel writing whose previous books include the million-selling autobiography "My Life," didn't need a lot of research to tell readers what it's like to sit inside the White House Situation Room or to be briefed on a possible terrorist attack, or to imagine slipping away entirely.

"Jim wanted it to be authentic," Clinton said. "Which means: A, the physical setting has to be authentic. B, the procedures had to be authentic, and the interplay between the president and the staff and all the world leaders and everything had to have the feel of reality, and even how the Secret Service works."

The novel has received rave reviews from critics, praising all from its "crisp pacing" to "stylistic blend," as historian Ron Chernow told The Associated Press. "The book has a knowing, inside feel," he said.

The storyline even includes impeachment, a historic low point in Clinton's own presidency.

Clinton is the rare president even to attempt a novel — Franklin Roosevelt came up with the initial idea for what became "The President's Mystery Plot," a serialized thriller worked on by several authors.