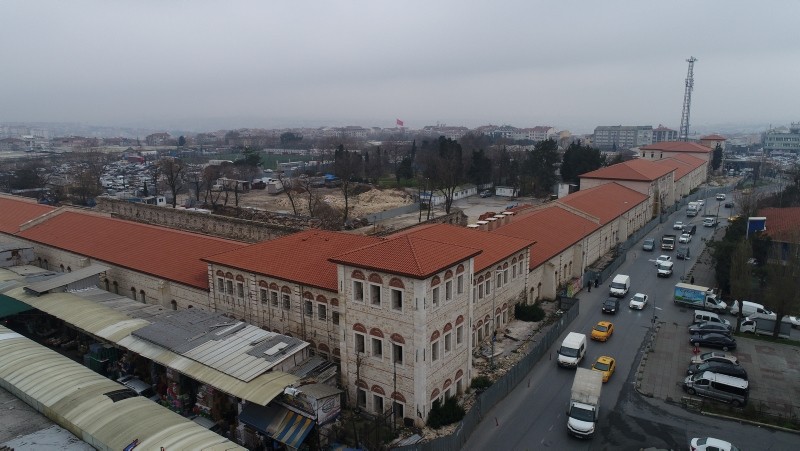 Istanbul, a sprawling city of 15 million people, will soon open its doors to the country's largest public library.

The historic Rami Artillery Barracks, built in the 1770s in Eyüp district on the European side of the city, will be converted into a library with a capacity of 7 million books.

President Recep Tayyip Erdoğan announced the project last week during a fast-breaking dinner in the capital Ankara. The project is also mentioned in the ruling Justice and Development Party's (AK Party) election manifesto.

"We are making efforts to encourage our generation to [read] books," Erdoğan said at an event in Zeytinburnu district of Istanbul on Sunday.

Speaking to Anadolu Agency, Coşkun Yılmaz, provincial director of culture and tourism, said: "The plan is to construct Turkey's biggest library and book valley. Once [the project is] completed it will also be a candidate for the biggest library in the world."

The library will have reading rooms, exhibition halls, cafes, cinemas, and stores.

"There will be spaces inside where visitors can sit and spend long hours," Yılmaz said.

The library will host a section for children and collectors, and hold books on art and the city. A museum will tell visitors the history of books starting from the invention of paper, said Yılmaz. The parking lot will have capacity of 1,250 vehicles. The project, expected to cost 200 million Turkish Liras [$43.3 million], will open in 2020.

According to the information obtained from the Ministry of Culture and Tourism, the Rami Barracks were built in the period of Sultan Mustafa III (1757-1774) and renovated and expanded by Sultan Mahmud II between 1828 and 1829. The Rami Barracks, used as Sultan Abdülmecid's military headquarters during the Crimean War, gained their last form during the reign of Sultan Abdülhamid II. The barracks continued to serve the army during the first years of the Republic and completed their military function in the 1960s.

Later on, they temporarily were assigned to dry food wholesalers by the Eyüp City Council.The Rami Barracks were registered as "cultural property" on October 14, 1972 by the Ministry of Culture and Tourism. As food stores located on the Eminönü and Unkapanı coasts of Haliç, an industry and trade center since the Byzantine era, in modern times caused traffic jams, pollution and noise, Istanbul Metropolitan Municipality's then Mayor Bedrettin Dalan ordered the stores to be moved to the barracks in 1986.

The shopkeepers that were temporarily moved to the Rami Barracks have been working there for the last 28 years, however, 1,500 shops in the barracks will be moved to a new location in two or three years. Featuring a football field and parks for youngsters, the barracks are surrounded with garbage and their walls are covered with graffiti. The Rami Barracks, which cover 220,000 square-meters feature a rectangle shaped yard, eight wings and five separated blocks. Built of stone masonry, the barracks have been renovated many times.

Another giant library is planned for capital Ankara.

The Presidential Library is being built inside the presidential complex located in the Beştepe neighborhood of Ankara.

Speaking during a rally last week, Erdoğan said the library whose construction started in the summer of 2016 will house 5 million books.

It will stay open for 24 hours, he added.

The library will have modern infrastructure and Ottoman and Seljuk architecture.

Turkish Librarians Association head Ali Fuat Kartal told Anadolu Agency: "It is such a nice move that the libraries with unique features are being built with the enriched collection."

When the construction is completed in 2019, the building will consist of separate sections for researchers, children, and students.

It will also enable researchers to access many of the world's leading libraries via digital connections and will be the presidential complex's third building which will be open to the public.

According to a 2017 report published by Turkish Statistical Institute, Turkey has around 29,000 libraries across the nation. It includes one national library, 1,137 public libraries and over 500 university libraries.