Kashmiri writer Feroz Rather's novel ‘The Night of the Broken Glass' consists of 13 stories that bear witness to life during clashes in Kashmir; written in a striking, in-your-face style

Young Kashmiri writer Feroz Rather takes a daring plunge into the macabre realm of violence and death in his debut novel "The Night of Broken Glass." Spanning 13 stories - predominantly set in southern part of Indian-administered Kashmir - it is a tale told with a certain Conradian sensibility, where the tragic landscape and vagaries of the Kashmir conflict are sketched in all their ghoulish details. It is a composite bundle of haunting stories with surrealistic turns in them; it is a book that pulsates with savage ironies and moral dilemmas; it is a narrative that speaks as much for the dead as for the living. 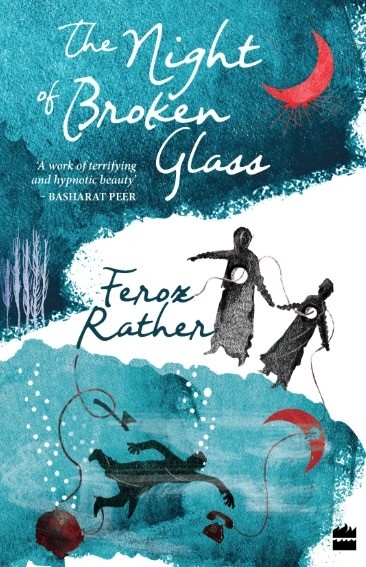 In the first story "The Old Man in The Cottage," an incognito rebel obtains an easy entry into the farmhouse of his old tormentor, Inspector Masoodi - who had once struck him "with fury and violence" but now lays bed-ridden with a terrible illness. Should he proceed and hack his skull with an ax or let him die a slow and painful death? As the sick Masoodi dozes off after bouts of coughing, the rebel is struck with agonizing questions, "Here he was on the verge of death. The same man who had captured me and handed me to Major S. Would he ever know the pain of being sold by a fellow countryman to an outsider? What kind of shackles were these which withheld me from hacking his body to pieces?"

Like Shahnaz Bashir's "Scattered Souls" (2016), which also dealt with the Kashmir conflict, "The Night of Broken Glass" is a novel-in-stories, which is told through multiple narrative voices. This feature imbues distinctiveness to each tale, but without losing coherence of the overall narrative. In "The Souvenir" the first-person narrator, a school-going teenager Tariq, recounts his nightmarish encounter with Indian soldiers who command him to fire a gun ("I shuddered and opened my eyes. I pressed the trigger..."); and in "Rosy," the eponymous narrator makes a passionate and stirring confession of her love to Jamshid (the leader of Jammu Kashmir Youth Front), whose rousing speech at Rasool Mir College in Anantnag had enchanted her ("You are a miracle of memory draped in the folds of eloquence. I have plunged with you in this scalding river whose brilliant waters I want to embrace without caring weather we'll reach the shore"). In "A Rebel's Return," the story is told from the perspective of a vengeful ghost, who lurks in Inspector Masoodi's home and haunts him ("I am a forbidden shadow in this space, and in the absence of light and human contact, I feel an almost lethal contentment"). In "The Miscreant," the story unfolds as a long monologue from the character Tariq in prison, where he is handcuffed to another prisoner Mohsin, whose belief in God he questions and rants about ("What kind of fool's paradise are you living in? And how dare you think of paradise when Kashmir still exists on earth. Why the fuck don't you understand that the occupation itself is the deepest circle of hell and there is no hell beyond it?").

In "The Pheran," we are introduced to a strong female character, Maryam, whose "resonant idealism" and revulsion at the corrupt bureau chief of the Informer, which makes her quit her journalism career and return to her preferred world of elegant stitching, a work, which, unlike the alienating job of reporting, allowed her to "reflect and contemplate." Yet, like everyone else, her life is hostage to the vagaries of the conflict. Moments of peace are ephemeral, but uncertainty, anxiety and death painfully endless. Knowing that reporting means facing life-threatening situations, Maryam suggests her boyfriend Safir to leave the job as well ("You could sell shoes or furniture or books... Or we can build something together").

However, it is through a journalist's eye we see the brutal and tragic realities of the war, grope through its unnerving fogginess, and meet those shady actors and grieving survivors who make up its dramatis personae. In the second part of "The Pheran," Safir, who works for the Informer, takes us to a village 25-miles south of Srinagar, where he meets Abdul Rashid, a devastated man whose one son is dead, another a rebel on the run, and whose wife disappears after turning insane. But this meeting is not a usual one, and Safir realizes that. So, instead of acting like an inquisitive journalist, he offers a consolatory silence in the company of a grieving father. This is one of the beautiful scenes in the book, where Rashid's tragedy and inner turmoil is contrasted with the scenic landscape of blooming yellow mustard fields in the background. This juxtaposition of tragedy and loveliness conveys a sad irony of the conflict, where inhabitants of the paradisaical homeland are caught in the throes of an unending struggle.

One of the notable features of Rather's narrative is its in-your-face description of violence. He forces you to see, feel and smell violence in its gory and unsettling details. When a nervous paramilitary trooper in a Zero Bridge bunker (in Srinagar) shoots down Maryam's cousin Ishfaq, we are shown "The blood gurgled out of the holes in Ishfaq's stomach. The semi-digested chicken and spinach spurted out." In another gruesome scene - which resembles Tufail Matoo's death on June 11, 2010 - we are told: "His skull was split. Blood and brain matter had trickled out on to his face." Likewise, in "The Cowherd," when the 60-year old cobbler Sultan Sheikh grows desperate with starvation, he hacks at a dead cow and "With his bare hands, he dug out the guts from the cow's belly and flung them on the branches of the surrounding trees." It is in these gut-wrenching scenes - and there are plenty of them in the book - where Rather's prose bubbles with the undercurrents of existentialism.

While the conflict does produce violent events, its effects can also subtly manifest in smaller things, in ordinary quotidian matters. In the "Summer of 2010," when muezzin Ali Muhammad gives the call to prayer during the prolonged period of curfew days, his voice "begun to quaver" and "the soothing, graceful notes were missing, and the recital sounded

cracked and raspy." But, the conflict not only produces characters like journalist Boss, who befriends powerful people to climb the ladder of success, but also shady places like the Tunnel and Cafe Barbarica, the mysterious underworld in Srinagar's military cantonment where dark secrets are exchanged, and internal sources cultivated. And yet, the conflict also produces monstrosities like the Wall, which, "soaring into the sky, halved the city" and, as journalist Safir felt, "kept him from even imagining where his home was."

Rather is at his finest when he subtly brings out tension and intersection of class and caste, whether it is Gulam's alienation from his son Jamshid ( "Were you ashamed that your father is a Sheikh and a watul, a dirty, lower-caste cobbler") or Rosy's rebellion against her family ("I want to burn down the edifice of the whole damn society who believe that your soul is black dirt because you are Sheikh while mine is made of white and gold feathers because I am a Syed") or Gulam's affair with Misreh, a baker's wife. Rather uses these characters as a vehicle to comment on social inequalities and rigid hierarchies of Kashmiri society. Nevertheless, he complicates the picture by showing how certain moments can override these differences and render them meaningless. This is where the Bijbyor massacre, in which 51 Kashmiris were gunned down by Indian armed forces on the fateful day of Oct. 22, 1993, comes as an important event, through which the destinies of Gulam and the religious cleric Anzar Shah coheres to build a tragic denouement of the narrative. In one of the most poignant scenes in the aftermath of the massacre, Gulam feels a traumatic epiphany, and the narrator says, "But now all of them, all the boys and men whose shoes he had polished, were gone. What was left were the shoes. As long as Gulam lived, he would guard them and polish them religiously." Like "Kristallnacht," the November 1938 anti-Jewish program in Germany (also called the "Night of Broken Glass") in which the windows of Jewish properties and religious buildings were smashed and filled the streets, the scene of littered shoes of slain protesters on the tarmac at Bijbyor is also pregnant with symbolism. It is a scene which signifies a great tragedy, embodies the brutalities of the state, and represents a bloodied milestone in the march of Azadi (freedom). In the yearly remembrance of the massacre, we get only sketchy details of the event and the people who died in it. But, in "The Night of Broken Glass," the slain are humanized - though the account is a fictional one - and infused with their complexities, idiosyncrasies, and life histories.

The pioneering fictional work on the Kashmir conflict "The Collaborator" (2011) by Mirza Waheed traverses the landscape of north Kashmir, his second novel "The Book of Golden Leaves" (2014) explores the downtown area in Srinagar. Shahnaz Bashir's "Half Mother" (2014) and "Scattered Souls" (2016) unfolds mostly in central Kashmir. And now, through "The Night of Broken Glass" the full geography of the conflict is covered, as the stories are mostly based in southern Kashmir. It is a welcome addition to the emerging English literary corpus on Kashmir. Rather's is a bold new voice which does not hesitate to raise vexed questions and push the boundaries of what can be written. It is a narrative of revenge and anger, and yet filled with humanity, compassion and passionate love.