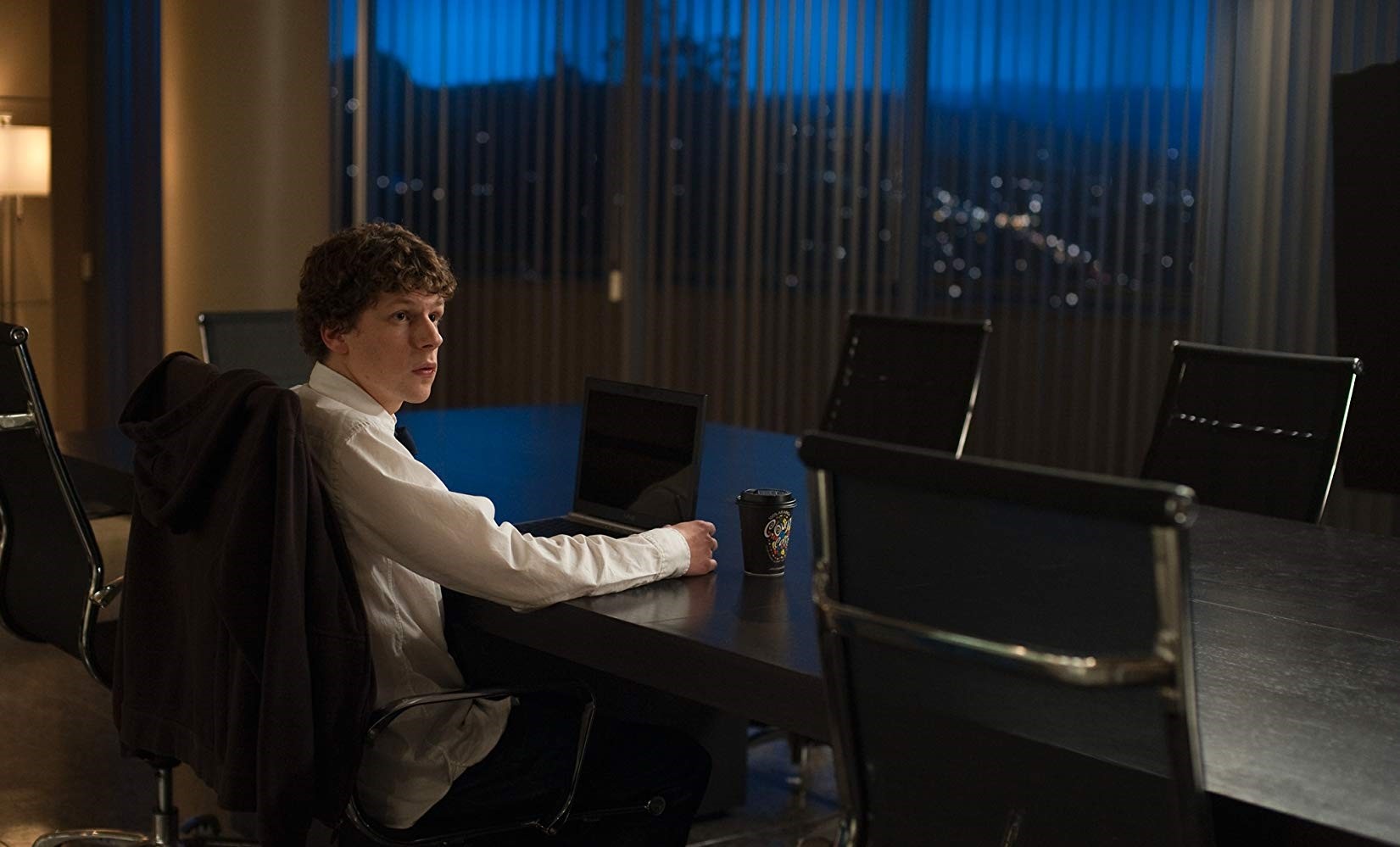 David Fincher's ‘The Social Network' tells the story of the creation of Facebook, a platform that we now take for granted, and willingly and knowingly feed with our own information. It is quite sobering, in 2018, to revisit the company's beginnings and remember that all the problems we associate with it now, such as breach of privacy, the breakup of real friendships, were there at its very inception

We have recently come out of another Eid where extended families came together to discuss days of yore in their memleket (home county), how the rain destroyed everything one spring and how many moons ago Ahmet shot Mehmet in broad daylight due to a farm border dispute. And so I found myself discussing the early 2000s with a younger cousin who does not know a world without Facebook. "The year was 2007" I told her, "and I was visiting a German friend in Oxford, and she told me about this site that the American students seemed to be using." It is true that the cool kids live elsewhere now, but Facebook continues to be used by billions of people, and knowing how it came about is surely of interest for anyone who is concerned about the Cambridge Analytica scandal, about how we become users to be harvested for commercial and political interests.

So, to educate the young cousin I sat down with her to re-watch "The Social Network," and it proved a doubly nostalgic experience - nostalgia both for the early days of Facebook, and for the year 2010 when the film was released. It starts with Mark Zuckerberg, played by Jesse Eisenberg, speaking about the prestige of the various clubs at Harvard, to Erica Albright (played by Rooney Mara) a girl who he is supposed to be dating. Erica, who studies at Boston University (yes, that becomes very important), is not impressed by his quick-fire analysis of the various clubs at the university. 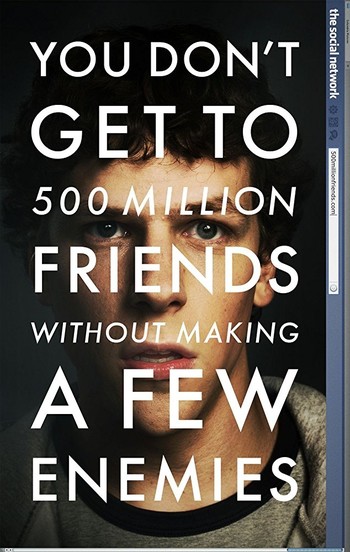 Zuckerberg is portrayed as a young man obsessed with class, and the word "exclusivity" runs through the film like a refrain. It's not a quality you associate with Facebook any more, but that's where it all started, Aaron Sorkin's script tells us. I joined in 2007, and I seem to have a vague memory of having to enter university email, or choose from a list what university you went to. I can't begin to guess how many members it had when I joined but it felt small enough as I roamed about people's profile pages, clicking on friends' friends' friends and at last seeing another hijabi face, and immediately adding her as a friend. Yes, those were the innocent days when it did feel everyone there must be the friend of a friend - fun to play the seven degrees of separation. But I digress...

College students have always found ingenious ways to intimidate, bully and ostracize one another. "The Social Network" reminds us of the genealogy of these methods; there is the ever-present school paper, there is Mark Zuckerberg's live journal and references to MySpace. We learn the origins of the name Facebook; as I type the word now, my word processor recognizes and capitalizes it. In the film, as Zuckerberg types it, there is a blue line under it, alerting him to the fact that such a word does not exist. What Zuckerberg is referring to in his live journal is his Harvard college web page that has pictures of all the faces living in his dorm. In his frustration of having been dumped by a girl from Boston University he decides, like so many males of the species, to take it out on other random females, and so writes an algorithm, with the help of his friend Eduardo Saverin, for a link where you can compare faces of girls to decide which one is more attractive - the very definition of click bait.

Remember this is 2004, and college kids procrastinating on their papers are not yet being bombarded with personality quizzes, so what better way to fritter away your time. David Fincher does his thing and we get glimpses of students clicking on faces, saying "right," "left," going through dozens of pictures of girls. Some girls are complicit in this "game," but then one of them goes "I know that girl" with alarm and dismay. It's one thing passing judgment on mere "faces," another to vote on someone you personally know as unattractive. The film is full of these moments that give us a glimpse of all the strange and dark places that Facebook will lead to while it is still in the bud.

Zuckerberg then manages to download faces from other Harvard hall sites, enlarges his database and increases clicks on his link to the extent that they crash the Harvard network. It is this sense of power that seems to push Zuckerberg forward, and fate hands him the opportunity to outwit the jocks we saw him rant about in the very first scene. It is Harvard after all, and even the athletic types have a head for business, and Zuckerberg's success in crashing the network attracts the attention of the Winklevoss brothers who have already been thinking of setting up a site that connects Harvard students. They want Zuckerberg on board. But the way they treat him as they ask for help rubs him the wrong way, and Zuckerberg is already ready to be offended. And so he takes the idea and runs away with it himself.

They say history is written by the victors, but Zuckerberg does not come out of Sorkin's version of Facebook history very well. The film suggests that the idea belonged to the Winklevoss brothers, and the first algorithm was written by Saverin. The film is in fact framed within two separate lawsuits Zuckerberg is fighting, and we get flashbacks to the earlier days of the company. The story is at times too allegorical - the foundation of a social network site that is supposed to help you make friends leaves its founder friendless by the time it reaches its one millionth member. And who among us has not observed real friendships unravel on Facebook, and I'm not even going into the complications caused to real relationships by the "relationship status"- another aspect of Facebook that the film treats in its very inception, in the lives of its founders.

Watching the friendship between Zuckerberg and Saverin unravel is quite poignant. The first scene we see them together is them getting excited as their site blooms in the early stages, having fun, and then Zuckerberg gets swept away by Sean Parker, founder of Napster, a name that is already history for my cousin's generation. (For my money, Justin Timberlake gives one of the best performances in the film. "Drop the 'the'.") When we return to the settlement room, the chemistry between Eisenberg's Zuckerberg and Garfield's Saverin is perfect. You get all the frustration and sadness, but also what once was friendship between them through the looks and one-liners they throw at one another.

But I guess the mistake is to think that Facebook was launched to foster friendship. It starts, in the words of Zuckerberg in the film, as an exclusive club where Zuckerberg and Saverin can be presidents. That is why it starts off with Harvard, and then only slowly branches out to other Ivy League schools. The scene where we and the Winklevoss brothers learn that Facebook has crossed over the pond is one of my favorites because, I guess, that is where it overlaps with my own personal history. The film ends with Zuckerberg as an embodiment of our increasing need to get online validation. He sits alone in the settlement room looking at the social network he has created, open at the profile page of the girl who rejected him in the very first scene. He hesitates, and then sends her a friend request. Then he refreshes the page. And again...