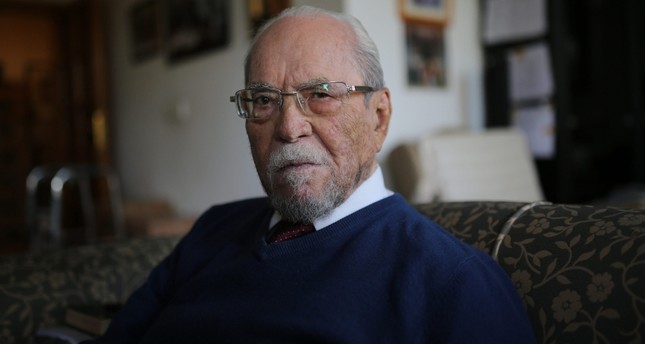 The Consulate General of Hungary in Istanbul held a special event on Monday to commemorate late historian Halil İnalcık and launch a book of his published after his death. The event was participated by historian and academician Professor İlber Ortaylı, historian Professor Mehmet Genç, historian Professor Özer Ergenç, Hungarian Professor Pal Fodor and Bulgarian History Professor Evgeni Radushev. Having had worked with legendary professor İnalcık, all participants have celebrated the launch of the book titled "Fatih Sultan Mehmed Döneminde Tuna Boyunda Osmanlı Düzeni" ("Ottoman Military and Administrative Order on the Lower Danube during the Time of Mehmed the Conqueror") while telling their memories with the late historian. 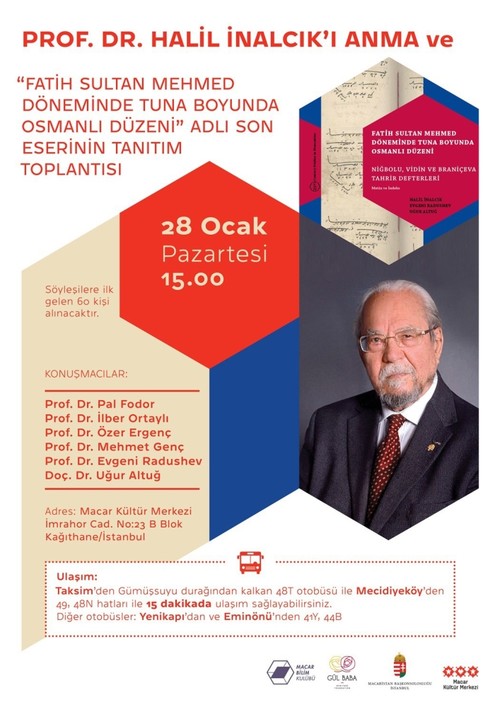 Mehmet Genç reminded that Halil İnalcık was an academician who observed the rules of objective and technical historiography. He was also known around the world with his works in English.

"If you asked who Halil İnalcık is, the first answer Western, Eastern and Balkan people will give is that he is the master who thoroughly approached, studied, translated and published the history of Balkans on the basis of Turkish documents," İlber Ortaylı said.

Pointing out that "Suret-i Defter-i Sancak-i Arvanid" (Ottoman Tax Register Book for Albania) which was edited by İnalcık, is one of the very first books in Turkish history, Ortaylı added, "It changed all the opinions and ideas in the history of Albania. In the aftermath, so many Albanian historians emerged as all we know. The Tax Register Book stands as a true origin for all historians who want to study Albanian Ottomanism. Robert Anhegger, our honorary citizen who loved Turkey very much, worked with İnalcık for the book project. He revealed the investigations conducted in the time of Sultan Mehmed the Conqueror. He was also an expert on Balkans, especially on Balkan mines."

During his speech Ortaylı also drew attention to the issue that Ottoman archaeology must be studied more and said, "İnalcık also had a bash at the area, however the mission must be taken over by other historians now. What's more, the completion of the Balkan empires realized in the time Sultan Mehmed the Conqueror. That's why it is a must to know the era of Sultan Mehmed thoroughly for studying the history of the empires and history of Post-Roman Empire Balkans. Such a late accepted fact it is."

Ortaylı said that he wishes a Hungarology department opens its doors to students in Istanbul and said, "It is a fact that Hungary joined the Ottomans as the country that represented Renaissance culture. Hungarian surveys are of high importance. If the same department is put into service here, in Istanbul, a major part of the history of Europe will be uncovered via Ottoman-Hungarian surveys. In this context, I also congratulate my fellows who edited the book 'Fatih Sultan Mehmed Döneminde Tuna Boyunda Osmanlı Düzeni' ('Ottoman Military and Administrative Order on the Lower Danube during the Time of Mehmed the Conqueror') in the name of our master, İnalcık."

Known with his studies conducted on the Economic History of the Ottoman Empire, Mehmet Genç also noted that he met İnalcık at Ottoman Archives and said, "He was a genius in addition to his modest, kind and elegant side. We became close friends despite the age gap between us."

Stressing that İnalcık approached history as a branch of social sciences, Genç added, "I guess he was inspired by the Annales School. His nationalism was kind of a moderate one without sacrificing objectivity. He was a researcher who fell in line with the rules of objective and technical historiography. İnalcık gained a worldwide fame by publishing the sources of Turkish history in English. Ottoman history is still a black hole for humanity and İnalcık always worked to shed light on that hole." Genç emphasized that İnalcık's Balkan studies produced a profound effect in Balkans and said, "During a time which is hopelessly haunted by Turkophobia (Anti-Turkism) and Islamophobia, İnalcık enlightened the issue with his works on Ottoman history."

Özer Ergenç, who is also one of the students of İnalcık, stated that a considerable part of Balkan historians accept Ottoman rule in Balkans as a long period that prevented Balkan nations' development and added, the book mentioned will shed light on the issue. In addition to Turcologist Pal Fodor, Evgeni Radushev, one of the contributors of the book, and Assoc. Prof Uğur Altuğ who is one of the postgraduate students of Halil İnalcık talked on the studies they conducted with the master and shared their memories with the participants as part of the event.

Share on Facebook Share on Twitter
Previous in Books Turns out that Turkey's biggest bookworms reside in Istanbul. According... Next in Books One of the book world's greatest mysteries is finally ending: J.D....
DAILY SABAH RECOMMENDS