The new exhibition at the Hungarian Cultural Center reveals the long story of Hungarian children's book illustrations with the work of legendary designers from the '50s and '60s as well as contemporary artists. The exhibition, which is comprised of the drawings of almost 50 artists, discusses the richness of Hungarian illustration, from symbolism to grotesque, and invites spectators to the fascinating world of poetry and fairy tales with games and in an interactive way. It includes examples from Hungarian children's books published in recent years along with paintings.

The exhibition, to be opened tomorrow and visited until Apr. 24, presents Hungarian children's books and their illustrations from different periods with fine examples. In the '50s and '60s, many important poets such as Agnes Nemes Nagy or Sandor Weöres turned to children's literature because they were silenced under the oppressive regime and could not publish their poems. Bringing a new perspective to children's poems, these poets also started a transformation in the tradition of children's book illustration. Today, writers and illustrators of Hungarian children's books, who are considered to have entered a new golden age in the 21st century and won acclaim worldwide, have expanded on the art these pioneers created.

The exhibition, which salutes the Bologna Children's Book Fair, held every year in April, will start with the presentation of the famous illustrator and puppeteer David Remsey. Remsey will also organize several workshops for Hungarian and Turkish children in the following days. 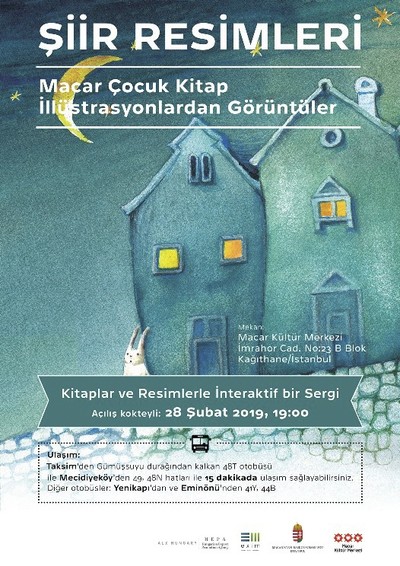 In the exhibition, works by legendary figures of the Hungarian illustration tradition, who were awarded numerous national and international awards – including Laszlo Reber, Endre Balint, Gyula Hincz and Janos Kass – and contemporary illustrators will be on display.