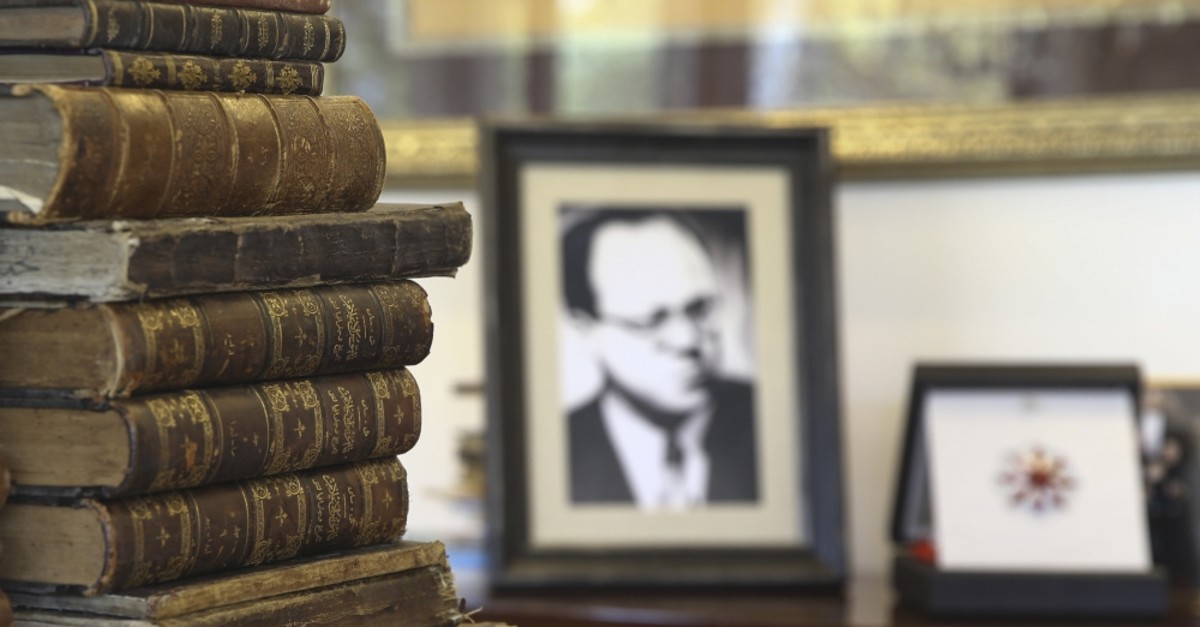 Writer and translator Cemil Meriç's daughter Ümit Meriç has granted 300 unique works from her father's library to the Presidential Library.

Cemil Meriç researched and wrote on many fields of social sciences, including language, history, literature, philosophy and sociology. He left dozens of articles along with eight translated works and 12 books behind. In 2015, he was deemed worthy of the Presidential Culture and Art Grand Fidelity Award. Recently, the writer's daughter professor Ümit Meriç delivered some unique heirloom works written in Ottoman Turkish from her father's library to the officials of the Presidential Administrative Affairs Department, Directorate of Libraries.

Officials carefully transported the works from Ümit Meriç's house in cars. Talking about her idea to grant these high-value heirloom works, Meriç stated that the books will be opened to the public at the Presidential Library.

Meriç expressed that the works will also take place in the digital archive and thus researchers from around the world will have access to them. She noted that her father's library contains 11,500 books, and most of the 300 books granted to the Presidential Library were published in Istanbul, known as Konstantiniyye or Dersaadet earlier. There are also some books published in Mumbai, formerly Bombay, in India and Alexandria in Egypt among these works. "My father wrote his name and from where he bought the book on the first page of some works. He took notes on some of them. They are all read by my father and then my mother. I also read some of them." 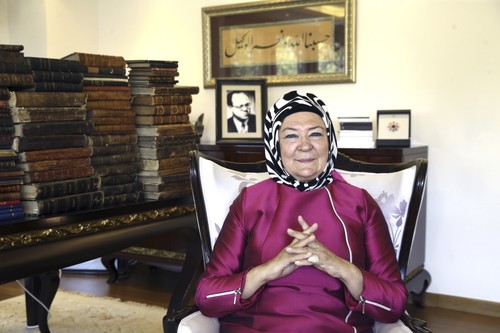 Ümit Meriç in front of a photo of her father Cemil Meriç. She has donated some of his books to the Presidential Library.

It is planned that there will be 5 million books in the Presidential Library. Noting that she also wanted to contribute to this target, Meriç added, "As a sociology teacher, I think that this library should be the most important center of Turkish-Islamic history in the world. Therefore, the center of all books about Turkish-Islamic civilization, regardless of their language, should be in this library. By bestowing the books in my father's library, which are the most important works of our scholar world, I believe that our national conscience and memory, which is disappearing day by day, will be reacquainted to the youth."

Mentioning that all the books bear traces of her father, Meriç continued, "In all the volumes, I feel the warmth of my father's hands. Some of them were the books that we read together. However, I thought that it will be egocentric to have all these books in my library even if they have memories for me. By giving them to the Presidential Complex, I wanted to add a part to the memory of my country, where the past and present are together. I present this heritage to my state, that is, my people."

Ümit Meriç said that Cemil Meriç, who she describes as a "hero," lost his sight at the age of 38 and had a stroke at the age of 68. She continued to say "He passed away when he was 71. He was one of the most prominent thinkers raised in Turkey in the 20th century. He liked reading so much and described it as 'the beauty of riddling.' After going blind, he enlightened his dark world with books. He was a professional who dedicated his works to the country's values."

The Presidential Library, which will be open to serve readers on the grounds of the Presidential Complex for 24 hours each day, is largely complete. In the library, where 5 million books will be housed, more than 1.5 million works have been cataloged. There will be special sections for children, students and researchers in the building. The furniture in the library is arranged, as well. It is intended that the library will open at the end of the year.

Journalist and writer Mehmed Şevket Eygi, musician and composer Çinuçen Tanrıkorur, who passed away in 2000, and academic historian professor İlber Ortaylı have all granted their books to the library. Lastly, Cemil Meriç's daughter presented her father's books to the complex. Some books from Qatar, France and Chile are also on the way.

It has also been learned that a handwritten Quran was granted by President Recep Tayyip Erdoğan to the library. It is expected that Erdoğan's personal library, which he bought by selling postcards during his high school years and described as his most profitable investment, will be added to the body of the Presidential Library after the opening. Erdoğan's library includes many notable books, including Ömer Nasuhi Bilmen's "Istılahat-ı Fıkhiyye Kamusu" ("The Dictionary of Superior Canon Law").