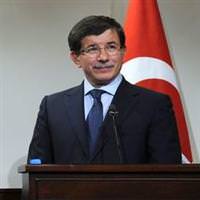 Foreign ministers of energy-rich Gulf monarchies and Turkey on Sunday held a new round of talks aimed at boosting economic and political ties and signing a free trade agreement.

KUWAIT CITY, (AFP) - Turkish Foreign Minister Ahmet Davutoglu said the meeting agreed to form working teams on economic and cultural sectors including transport, education and health.
"The teams will jointly study cooperation plans... so the GCC and Turkey will be integrated in all economic aspects," Davutoglu told reporters.
"We believe that Turkey and the GCC have the same objectives in many fields," he said.
Kuwait's Foreign Minister Sheikh Mohammad al-Sabah, whose country holds the rotating presidency of the six-nation Gulf Cooperation Council (GCC), said the meeting also discussed several political issues.
A programme to develop strategic ties between the two parties was agreed, he said.
Opening the meeting earlier, Sheikh Mohammad said GCC-Turkey trade has grown rapidly.
The GCC and Turkey in September 2008 signed a memorandum of understanding to achieve a strategic partnership in all fields between the pro-Western Arab bloc and Ankara.
Sheikh Mohammad said trade between the GCC and Turkey grew from 1.5 billion dollars (1.1 billion euros) in 1999 to 17.5 billion dollars (12.5 billion euros) in 2008.
In 2008, GCC exports to Turkey rose five times over 2007 and imports from Ankara increased a massive 15-fold, he said.
But GCC secretary general Abdulrahman al-Attiyah told the meeting that although there was some progress in certain aspects of cooperation, obstacles to a free trade agreement still existed.
Attiyah said that a joint economic cooperation committee was formed this year to activate a framework trade agreement signed in 2005 with the ultimate aim of striking a free trade accord.
The two blocs were also boosting security and counter-terrorism cooperation and discussing a proposal for a rail link between them, he said.
"Negotiations (on a free trade agreement) are still facing obstacles hindering its conclusion," Attiyah said without elaborating.
The GCC groups Bahrain, Kuwait, Oman, Qatar, Saudi Arabia and the United Arab Emirates.
Last Update: Oct 18, 2010 4:32 am
RELATED TOPICS