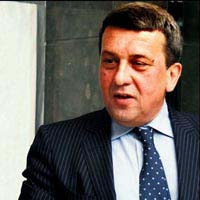 İş Bankası has announced that it is on the verge of finalizing a deal to acquire a bank in Russia.

Deputy Chief Executive Aykut Demiray said on Thursday that the acquisition of the small bank will be completed by December but didn't reveal any further details such as the name of the bank or the cost of the purchase. Demiray was speaking in İstanbul at a European Bank for Reconstruction and Development (EBRD) meeting sponsored by İş Bankası.

Demiray also mentioned that İş Bankası also has further plans to enter Kazakhstan and several Balkan states through acquisitions and by establishing representative offices or branches in countries where it cannot buy a bank. "Our essential purpose [in purchasing a bank in Russia] was to support the large investments of Turkish companies in this country, such as Şişecam. Moreover, there are also many tourists coming to Turkey from Russia whom we see as potential customers. Aside from these, we don't have a particular strategy with regards to the Russian financial market," said Demiray.

He noted that İş Bankası has a branch in London with more than one billion pounds in funds. Demiray said that they had also previously applied to open branches in the Iraqi cities of Bagdad and Erbil and in Bulgaria's Sofia. "We like think of our expanding operations to foreign countries to be a lot like planting seedlings. We need to take a good care of these plants without neglecting them. Some will grow while others may not. We are not afraid of buying small banks because we believe that transferring our know-how to these institutions will help them flourish," said Demiray.
CIHAN
Last Update: Oct 25, 2010 10:02 am
RELATED TOPICS