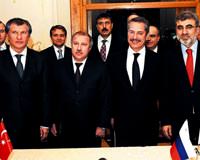 Russia’s largest company Rosneft and Çalık Enerji have signed a partnership agreement for both the international and Turkish arena. Internationally, the two companies will be retailing petrol, while in Turkey the focus will be on distribution.

Çalık Holding, one of Turkey's leading establishments has signed on to a strategic collaboration with one of the word's and Russia's biggest petroleum producers Rosneft. The agreement, which will deepen their current partnership, was signed by Çalık Holding Chairman of the Board Ahmet Çalık and Rosneft President Eduard Khudainatov in a ceremony also attended by Russia's Deputy Prime Minister Igor Sechin and Turkey's Minister of Energy and Natural Resources Taner Yıldız.
Within the scope of the agreement, Çalık Enerji and Rosneft will be in joint collaboration on both international oil sales as well as in the Turkish market. Accordingly, the partnership to be founded by both companies will be operating on fuel retail in the Mediterranean and petroleum distribution and sales in Turkey.In addition to distributing oil in Turkey, Çalık Enerji and Rosneft, will also be conducting bunker fuel sales. Noting the collaboration already in existence with Çalık Enerji, Rosneft President Eduard Khudainatov stated; "With the signatures we sign today, we will be further developing this partnership." For almost a year now, Çalık Enerji has displayed outstanding success in international petroleum tenders held by Rosneft. Revered for the performance exhibited in tenders entered by global giants, Çalık Enerji continues every month to consistently load their petroleum cargo and to conduct sales all over the world.
THESE SIGNATURES ARE A PART OF OUR PARTNERSHIP
Paying mention to Turkey and Russia's developing collaboration on the Samsun-Ceyhan crude oil pipeline and in natural gas Russian Deputy Prime Minister Igor Sechin states; "This document being signed is now a part of our partnership in the field of petroleum. Other efforts such as these are also ongoing. Turkey is our strategic ally in this region."
Mentioning that he would be continuing to hold meetings over the telephone with Minister of Energy Taner Yıldız, Sechin went on to state; "We will speak in mid-January to discuss energy projects. In the middle of March, we will be holding the second high-level collaboration meeting in Moscow, which will be attended by Prime Minister Erdoğan and Russian President Medvedev. As two countries, we must continue these efforts. I wish for good health and success for our Turkish partners."