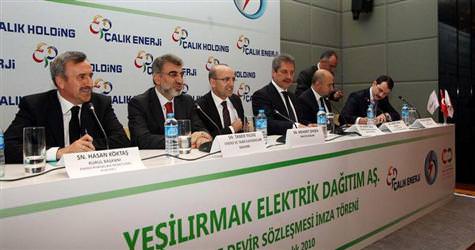 With approximately 20,000 employees in the energy, telecommunications, finance, construction, textiles, media and mining industries, the Çalık Holding family has now added another massive company to their operations.

The Yeşilırmak Elektrik Dağıtım A.Ş. (YEDAŞ), which has approximately 700 employees who provide electricity distribution to 1,470,000 subscribers in Samsun, Amasya, Çorum, Ordu and Sinop, is now under the management of Çalık Holding subsidiary Çalık Enerji, the winners of the November 9th, 2009 tender at $441,500,000.
The final transfer ceremony for the YEDAŞ acquisition took place on December 30th, 2010 at the Rixos Grand Hotel in Ankara and was attended by Minister of Finance Mehmet Şimşek and Minister of Energy and Natural Resources Taner Yıldız. During the ceremony held at the Rixos Grand Ankara Hotel, the final transfer agreement was signed by Çalık Holding President of the Board of Directors of Ahmet Çalık and Turkish Privatization Administration (ÖİB) Deputy Chairman Ahmet Aksu. Çalık Holding CEO Berat Albayrak, Çalık Enerji General Manager Osman Saim Dinç were amongst a significant number of others whom were in attendance of the ceremony.
Ahmet Çalık, the President of the Board of Directors of Çalık Holding, expressed how pleased he was YEDAŞ would be joining the Çalık Holding Group, and stated; "We place high significance on YEDAŞ. I consider the acquisition of this select establishment by Çalık Holding to be a social responsibility: our objective is to provide the best and highest quality service to the region's residents. Joined by YEDAŞ employees, our group will be signing on to a new success story in the region."
Emphasizing that during the year that has passed since the tender Çalık Group employees worked exceedingly hard during the transfer process and displayed successful team work, Çalık Holding CEO Berat Albayrak stated; "A new era begins for YEDAŞ. The valuable employees which have worked hard for the YEDAŞ establishment are now becoming part of a 20,000 member massive family. I believe that with the synergy derived from this collaboration, YEDAŞ will take on a significant position throughout Turkey. With YEDAŞ, we will be continuing to showcase the success we have displayed in the energy sector up until now."