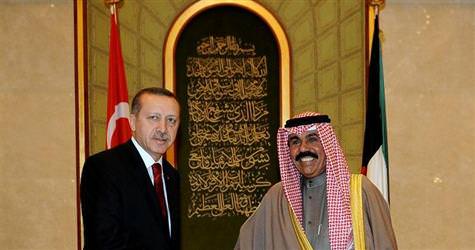 Erdogan, heading a 500-strong official and business delegation, is due to meet with Kuwait's emir and crown prince and hold talks with his counterpart Sheikh Nasser Mohammad al-Ahmad al-Sabah.

The Turkish premier is scheduled to take part in a two-day conference on Arab-Turkish relations opening Tuesday and will address a Kuwaiti-Turkish business forum at the Kuwait Chamber of Commerce, according to statements by the Turkish embassy.

Arab and Turkish parliamentarians also on Monday opened a two-day meeting to review ways to boost bilateral cooperation.
Economic and political relations between the two nations have grown in the past few years with the Kuwait Investment Authority, the sovereign wealth fund, raising its investments in Turkey to $1.7 billion.

Kuwait's private sector has in the past few years made key acquisitions in the Turkish banking sector while Turkish exports to Kuwait have increased. Ankara has been vying to boost its economic and political ties with the energy-rich Gulf Cooperation Council (GCC) states.

In September 2008, it signed a memorandum of understanding with GCC states to achieve a strategic partnership in all fields.

In the meeting, figures were presented stating that trade between the GCC and Turkey grew from $1.5 billion dollars in 1999 to $17.5 billion in 2008.
In 2008, GCC exports to Turkey rose five times over the 2007 figures, while imports from Ankara increased a massive 15-fold.