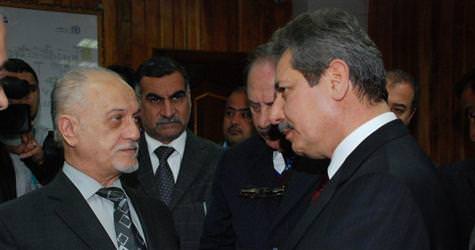 Çalık Enerji will now be taking on the 4445.5 million dollar task of building the largest energy power station in Iraq. Çalık Holding Chairman of the Executive Board Ahmet Çalık states, "We will provide 24-hour nonstop electricity to the central Euphrates.”

Çalık Enerji , a subsidiary of Çalık Holding will soon be establishing a 445.5 million dollar power station in Iraq. The agreement for the "Al Hayrat" power plant to be built in Karbala was signed between Çalık Enerji and Iraq's Ministry of Electricity in Baghdad.
On behalf of the Iraqi government, the agreement was signed by Iraq's Deputy Electricity Minister Selam Kazzaz and for Çalık Enerji by Çalık Holding Board Chairman Ahmet Çalık. Iraq's Deputy Prime Minister in charge of Energy Hussain al-Shahristani and Turkey's Ambassador to Baghdad Murat Özçelik were also present for the signing.

WE ARE INTERESTED IN ALL OF IRAQ'S ENERGY STATIONS
Çalık Holding Board Chairman Ahmet Çalık expressed how pleased he was to be building a power station in such a blessed place as Karbala and also mentioned that this project will provide an important role in developing relations between Turkey and Iraq.
Stating that they will build the station in the best way possible as well as in a timely manner, Çalık stated that the power station will provide 24-hour undisrupted electricity to districts within the Central Euphrates region. Emphasizing that Iraq is lacking when it comes to electricity and therefore the Iraqi Government made the decision to put an end to this deficiency, Çalık explained that both GAP İnşaat with a 194 million dollar project and Çalık Enerji with this 445 million dollar power station construction have taken on jobs in Iraq. Specialized in constructing international-level electricity producing stations, Çalık, expresses that as Çalık Enerji, they have an interest in all of the energy power plants in Iraq. Explaining that they have made offers on the tenders to be held by the Iraqi Government for a number of the nation's power stations, Çalık states, "We have made an offer regarding the Ninova Power Plant in Mosul, which the ministry is currently reviewing. Neighboring Iraq has a lot of potential. We are not just looking at this from a commercial standpoint. We are also approaching this emotionally. The Iraqi Government has an affirmative approach when it comes to Turkish companies. We have collaborated well with the Iraqi Government on this project. Our objective is to, in collaboration with the Ministry; fulfill this job in the best way possible."
Iraq's Deputy Prime Minister in charge of electricity Hussain Al-Shahristani stated that they will immediately begin work on constructing the 'Al Hayrat' Power Station in Karbala, which he also notes will be the largest energy station in Iraq. Al-Shahristani explains, "The combined power of the station is 1,250 megawatts. It will consist of 10 units, each totaling 125 megawatts. The plant will begin producing electricity 15 months after construction begins and we aim to complete the station in two years."
Iraq makes a big move towards rebuilding…
Iraq's Deputy Prime Minister for Energy Hussain Al-Shahristani also mentioned that both the 750 megawatt Ninova and the 500 megawatt Kudüs energy power plants were also going to be offered in tenders and that they have already received proposals from international companies. Stating that they have begun a substantial move in the reconstruction of Iraq in addition to energy and its related areas, Shahristani expressed their expectations for Turkish companies to take part in the tenders opened and to be opened in the future and that there is a lot of work available for any qualified Turkish company.
EMPLOYMENT OPPORTUNITIES FOR 500 PEOPLE
Hussain Al-Shahristani also states; "This station will provide electricity for the Karbala, Nejef, Babel and Divaniye districts. The 'Al-Hayrat' power station, which will also provide employment opportunities for 500 people; will initially operate with crude oil and later with gas."
Al-Shahristani has called on Turkish companies to invest in Iraq in the past.