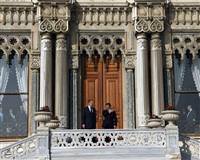 Prior to the rounds of meetings held in Istanbul between Iran and the West, Foreign Affairs Minister Davutoğlu shared an anecdote by Nasreddin Hodja, a folk hero, philosopher and sage, remembered for his funny stories; “everyone is right, but compromise.”

As host to the nuclear summit between the P5+1 and Iran, Turkey's Minister of Foreign Affairs Ahmet Davutoğlu delivered the message that there was not just one center of the world and that even if all sides are correct in their own right, a compromise must be reached.
Hosting the international event at Turkey's Çırağan Palace, Foreign Affairs Minister Davutoğlu first met with EU Foreign Policy Chief Ashton and Iran's Chief Negotiator Saeed Jalili. Later, he hosted all of the committee members at a dinner held at the Dolmabahçe Palace.
It was at this dinner that Minister Davutoğlu's words brought everyone to laughter, thereby establishing the ideal psychological environment for the sessions that were to follow. Davutoğlu's first anecdote by the sage Nasreddin Hodja was, "everyone is right, but compromise." However, the second anecdote he shared, "if you don't believe where my donkey stands, then measure it," was quite literally a lesson that there is not just one center of the world. Davutoğlu went on to state; "If everyone places themselves in the center of the world, then this issue will never be solved," and requested the sides all show empathy and put themselves in each others' shoes.