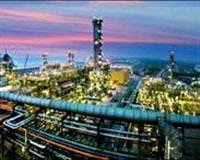 TEKFEN Construction, a subsidiary of TEKFEN Holding has signed onto a 630 million dollar agreement in Morocco.

According to an announcement made by Tekfen Holding, they have signed on to an agreement for three different projects in Morocco. The announcement released by Tekfen Holding in the Public Disclosure Platform (KAP) notes that on November 10th and December 20th, 2010, company subsidiary Tekfen Construction signed on to a 460 million dollar pipeline project with the Moroccan state establishment phosphate producer Office Chérifien des Phosphates S.A. and also won two other projects with their subsidiary Maroc Phosphore S.A.' for the building of two DAP facilities to a tune of a total 170 million dollars.
FOUR MILLION TON CAPACITY
According to the announcement, both agreements have been signed. Tekfen, which has already embarked upon a number of significant projects in Morocco, is currently working on the Samir Refinery Modernization Project for Morocco's sole petrol refinery, Samir Refineries. Tekfen has also signed an agreement to create a 4 million ton capacity crude petrol distillation unit as well as annual 600,000 ton capacity Merox-Kerosene Treatment units for 40.45 million Euros.