A Turkish wind blows at Davos... 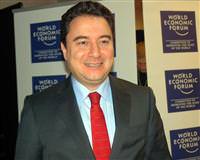 Turkey has become a specific point of interest in this year’s Davos Forum with government participation for the first time since Prime Minister Erdoğan's 'One minute' outburst. According to Klaus Schwab, the founder of the World Economic Forum, "Turkey is the country most in demand at Davos.”

Turkey is attending the Davos Forum on a government level for the first time in two years after Prime Minister Recep Tayyip Erdoğan's outburst to Israeli President Shimon Peres in which he demanded 'One Minute' to further express his thoughts. Turkey's Deputy Prime Minister and State Minister Ali Babacan is attending Davos representing Turkey and has as a result become the focus of attention at the summit. According to founder and Chairman of the World Economic Forum Klaus Schwab, Turkey is always one of the nation's most in demand at the Davos Forum and holds a very important place amongst the forum's long-standing participants. Schwab also expressed his pleasures at Turkey's decision to resume attendance at a governmental level.
"TURKEY IS A GLOBAL POWER"
Schwab noted that Turkey passed the test of the global economic crisis successfully and stated that the nation has become a global power. Underlining that Turkey is one of the most influential members of the G-20, Schwab emphasized that with this position they provide a significant contribution to shaping new global economy. Klaus Schwab also stated that in addition to economics, Turkey also displays important efforts towards establishing peace and stability from a political standpoint. Schwab also emphasized that Turkey, as a global power, must participate in all global meetings. Last year, Turkey staged a government level protest of Davos and chose to send Central Bank President Durmuş Yılmaz. This year's Davos Forum will continue until January 30th and is being attended by 2,500 participants from over 100 countries as well as over 1,400 members from the international business world.