US urges Turkey to deregulate to lure investment 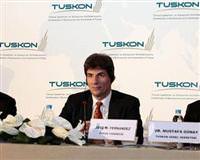 "We're interested in helping Turkey expand growth for overseas investment so U.S. pension funds can operate in Turkey," he said. "(This) could bring over a $1 billion in investment."

About 2 million of Turkey's 73 million people have a private pension plan. Turks spend about 1 percent of gross domestic product (GDP) on all insurance products, compared with 7 percent in developed nations.

U.S.-based drug companies would also invest in Turkey if the regulatory framework were clearer, Fernandez said.

"With the right investment climate in pharmaceutical, Turkey could receive as much as $1 billion of international investment, but a number of companies tell us they're deterred by what they see as inconsistent, non-transparent regulations," he said.

The United States also wants Turkey, which is on the U.S. piracy watchlist, to do more to safeguard intellectual property, Fernandez said.

He said U.S. investment in Turkey was about $6 billion.