The wheels are churning for automotives 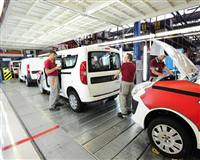 According to a written statement provided to the Public Disclosure Platform, or KAP, and signed by TOFAŞ's Accounting Director Selçuk Öncer and Financial Director Cengiz Eroldu, in order to meet both the domestic and foreign demand as well as to implement new projects, the company has decided to increase the number of shifts in operation from two to three as of March 2011.
The announcement states that they foresee hiring an additional 500 new employees initially and depending on both global and domestic demand developments and new project plans, that number may reach up to 1,200 new hires.