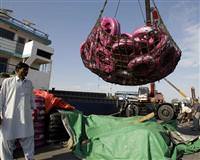 The sanctions target a procurement network that has facilitated more than $7 million in transactions for Aerospace Industries Organization, which oversees all of Iran's missile industries, the Treasury said in a statement.

The actions ban U.S. entities from transactions with the blacklisted people or businesses and seek to freeze any assets they may have under U.S. jurisdiction. The sanctions were imposed under a 2005 White House executive order aimed at disrupting proliferators of weapons of mass destruction by denying them access to the international financial system.

Aerospace Industries Organization was put on the Treasury's blacklist in 2005.

Separately, the U.S. Justice Department issued an indictment against Milad Jafari, 36, for conspiring to violate U.S. sanctions in 2007 by placing a $38,000 order for 660 pounds of a specialized steel welding wire used in aerospace applications with a Nevada company. He also ordered 4,410 pounds of a high-grade temperature-resistant stainless steel from a firm in Ohio, the Justice Department said.

The shipments were detained before they left the United States, the Justice Department said.

The Treasury also is blocking transactions with two Turkish nationals and three firms based in Istanbul that it said were supplying goods and services destined for Aerospace Industries Organization.

The Justice Department indictment said STEP placed an order for 3,410 pounds of U.S.-made precipitation hardening steel in 2006 on Jafari's behalf. It said Jafari was successful in executing other shipments of specialized metals and fiber optics from the United States to Iran via Turkey.

The United States has pressured Turkey to enforce international sanctions against Iran and scale back flourishing economic ties with Iran, one of its traditional trading partners.

Turkish Prime Minister Tayyip Erdogan has been reluctant to cut ties with Iran and has taken on somewhat of a buffer role as Western sanctions have increased. Turkey last month hosted nuclear talks between Iran and major world powers, but the discussions were described as a disappointment.

Stuart Levey, the Treasury's top sanctions official who has overseen efforts to block Iran's nuclear and missile activities during both the Bush and Obama administrations, described the targeted Jafari network as a "lifeline" for Iran's missile development program.

"The Treasury will continue to identify and expose channels Iran is using to defy international sanctions, wherever those channels may be located," Levey said.

The broad financial measures aimed at denying Iran a nuclear weapon and the means to deliver it have put pressure on Iran's economy, experts say, but their effectiveness in disrupting weapons development work remains unclear.