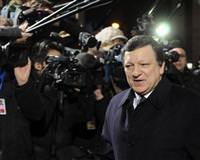 European Union leaders meet in Brussels on Friday for their first summit on energy issues.

Below are five key issues to watch.

EU officials argue that support from the European Commission will add investment certainty to energy projects such as the Desertec solar initiative in north Africa or the Nabucco pipeline to bring Caspian gas to Europe.

In a draft resolution by EU leaders, the Commission is invited to: "submit by June 2011 a communication on security of supply and international cooperation aimed at further improving the consistency and coherence of the EU's external action in the field of energy."

"Work should be taken forward as early as possible to develop a reliable transparent and rules-based partnership with Russia in areas of common interest in the field of energy," the resolution adds.

Ahead of the summit, France has been pushing leaders to give their backing to electricity generation from low-carbon sources, as opposed to just renewable sources.

This would implicitly open the door to more nuclear power, benefiting French nuclear companies such as Areva.

Environmentalists fear that the low-carbon target might eventually supersede the renewables goal, but European Commission officials rule that out.

"The EU and its member states will promote investment in renewables and safe and sustainable low carbon technologies," the draft resolution states.

EU governments have been slow to enact new laws they agreed in 2009 to liberalize their energy markets, and they will be asked on Friday to recommit to that plan.

The deadline for enacting the rules is March 3. About half of the EU's countries have already liberalized, but as of January only Denmark had actually implemented the latest rules. There are 60 infringement proceedings against countries for not liberalizing their markets under rules agreed in 2003.

Even once put into national law, it will take several years of implementation before EU energy markets are fully integrated.
EU officials see France as one of the countries most reluctant to liberalize. Lithuania is in a row with Russia about this issue.

"The internal market should be completed by 2014 so as to allow gas and electricity to flow freely," the draft resolution states.

"Legislation on the internal energy market must therefore be speedily and fully implemented by member states in full respect of the agreed deadlines."

EU plans for pan-European infrastructure to distribute gas and power are progressing slowly.

Many such projects will not be built by companies, because they are too risky or open up markets that they have successfully cornered for themselves.

Oettinger hopes leaders will give him a mandate to explore ways of financing these projects. If he gets the go-ahead, he is likely to report back to them by June with an idea of how much needs spending and a list of financial mechanisms to get the job done.

Such mechanisms might include loan guarantees and project bonds.

According to the draft resolution, "some projects that would be justified from a security of supply/solidarity perspective ... are unable to attract enough market-based finance."

"The Commission is invited to report by June 2011 to the Council on figures on the investments likely to be needed (and) on suggestions on how to respond to financing requirements."

EU governments should "accelerate work with a view to adopting technical standards for electric vehicle charging systems by mid-2011, and for smart grids and meters by the end of 2012," the draft adds.

Poland and Germany are pushing for the targets to be made legally binding, but are likely to meet widespread opposition.

"The 2020 20 percent energy efficiency target, which is presently not on track, must be delivered," the resolution drafted ahead of the summit said.

EU governments, it added, will "review the implementation of the EU energy efficiency target by 2013 and consider further measures if necessary."