Iran opens up to the world through Turkey 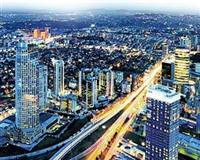 With sanctions in place by the west, Iran has chosen to use Turkey as their door to the world. When developing relations reflected on trade, every one out of five foreign companies established in Turkey are now from Iran.

After years of suffering from embargos enforced by Western nations, with the US at the forefront, energy giants Iran which has struggled to integrate with the global economy thus far will now open up to the world from Turkey.
Iranian companies which have faced difficulties trading internationally are now flocking to Turkey. Since 2008, Iranian firms have been subjected to scrupulous inspections of accounts and their connections have been tracked as if by their own shadows. When they found their exit strategy by operating in Istanbul, suddenly there was an explosion in numbers of firms opened in Turkey.
In the years 2007 and 2008, one could count the number of Iranian companies established in Istanbul on one hand. According to a listing of the ten countries operating the highest number of companies, prepared by the Istanbul Chamber of Commerce, Luxembourg had 22 companies, Belgium had 26 and South Korea had 17 companies, however Iran was not on the list. The zero problem policy however and the further developing of relations with our neighbors has worked to increase the trade volume as well as business connections between Turkey and Iran. In 2009, 263 companies with 15.7 million TL in capital were founded in Istanbul, with Iran taking fourth place. With Turkey's role as mediator for nuclear negotiations last year, relations further developed with Iran which therefore chose to veer their investments towards Turkey instead of the Middle East.
ONE OUT OF EVERY FIVE FOREIGNERS ARE FROM IRAN
Out of 3,044 foreign investments in Turkey, 22 percent were made by Iranians. While Iran has gone on to take the top spot in terms of numbers of foreign firms founded in Istanbul, the number of companies established also saw a two and a half fold increase, reaching 636. In terms of foundation capital strength, Iranian companies have gone from 15.7 million TL to 64 million TL. According to the capital ratio, taking fourth place, Iran's contribution has increased by over 400 percent. The majority of Iranian companies operate in the electronic appliances and textile sectors. In terms of capital, Spain, Holland and England all shared third place.

NUMBER OF FIRMS TO OPEN IN ISTANBUL INCREASES BY 17%
According to analysis from the Istanbul Chamber of Commerce, in 2009 33,753 companies were founded in Istanbul. In 2010, this figure increased by 17.31 percent, translating to 39,597 new companies established. Out of the firms founded, individual companies at 18,858 came in first, in second were 18,069 limited companies, in third were corporations at 2,242. According to Istanbul's Chamber of Commerce Chairman of the Board Murat Yalçıntaş, a 17.31 percent increase is a significant indicator. "While economy figures clearly show growth, the increase in number of companies opened, affirms it."

OBJECTIVE WITH IRAN IS TO REACH 30 BILLION DOLLARS IN FIVE YEARS
The 22nd Period Meeting Protocol for the Complex Economic Commission (KEK) between Turkey and Iran has been signed. During the KEK meetings, trade, free zones, contracting-technical consulting services, transportation, industry and customs were all discussed in the forefront. The objective with Iran is to reach a 30 billion dollar volume in five years.