A race for luxurious yachts 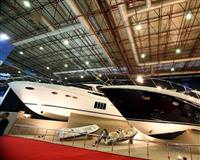 The vitality of Istanbul’s economy is evident once again, this time in the second largest yacht fair, the Avrasya Boat Show. A number of luxurious boats were bought up even before the opening of the show.

The second largest yacht fair in the world, the Avrasya Boat Show has seen interest in buyers before it even officially commenced. Yesterday marked the event's VIP opening and today the fair officially begins. The fair, which draws open sea lovers from all over the world, has boats for sale starting from 1,000 TL all the way up to 2.9 million sterling. Showing for the first time on an international scale with SABAH as the main sponsor, the Avrasya Boat Show 5th Annual Fair is expecting 130,000 visitors. The show, which exhibits luxurious yachts and speed boats, has grown this year in size by 25 percent and in number of brands by 40 percent.
With 400 boats and yachts up for sale, the increase in interest in this year's fair is due to the economy's vitality. Marine Administrative Board Member Ayhan Safter states that they have never before sold boats at the VIP opening in the past yet did last night. "We sold a C class boat in the early morning hours. A member of the administrative board of a holding came and picked up the 8.5 meter-long boat worth 100,000 dollars. This is a sign that sales will be wonderful this year."
Safter states, "We are selling products ranging from 1,000 TL to one hundred thousand dollars. Even civil servants are purchasing 1,000 TL motor boats at 12 payments, which come to 3TL a day." The largest and highest priced domestic-make boat is priced at two million Euros and is made by Vanelli, a brand owned by Erol Türkün, the owner of the Bursa textile producers Türkün Holding.
CUSTOMERS FROM HOLLAND
Textile boss Erol Türkün adds his own signature to the boats he produces. According to Türkün, four people have shown interest in his boats, one of which is a foreigner. "A Dutch businessman Van der Stek, whom I have also sent textiles to, is thinking about switching this yacht for his old one. We are about to make a deal," states Türkün.
EVEN FOREIGNERS ARE SURPRISED
Alican Gökşen, an administrator for Aye Marine, which brought Austria's Frauscher to Turkey, states; "we sold a 122,000 Euro yacht just a few hours after the VIP opening. Two Italian boat producers are here. They also witnessed the sale and the interest and want to reach an agreement so they can come out to Turkey."