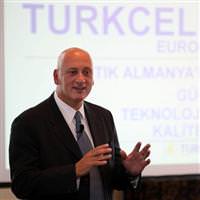 Turkey's biggest mobile operator Turkcell said it was open to Deutsche Telekom taking a stake in its German MVNO business Turkcell Europe and said it could launch something similar in Syria.

"We discussed Deutsche Telekom taking a stake but wanted to wait until the launch. It's still a possibility, and we are open to it," Chief Executive Sureyya Ciliv told Reuters in an interview on Monday at the Mobile World Congress in Barcelona.

Turkcell has partnered with Deutsche Telekom to offer 3G services on the German company's network -- as a mobile virtual network operator (MVNO) -- aimed at the millions of people living in Germany with ties to Turkey.

The service is to launch in April, Ciliv said.

Turkcell will consider expanding that business model in other countries where there is a large population with Turkish background.

Ciliv said it might also consider using that model in Syria and ruled out participating in a tender for a third cellphone license coming up in that country.

"Syria as a neighbouring country has high potential," Ciliv said.

"It will be either acquiring an existing network or using a network," Ciliv said and added that Turkcell, which generates about 80 percent of its revenue in its domestic market, was most interested in expanding into neighbouring countries and in North Africa.

Looking toward eastern Europe, Turkcell had not yet made a decision to bid for a stake in the national carrier the Serbian government plans to sell, Ciliv said.

"My team is looking at Telekom Srbija very carefully; it is an important opportunity," he said, adding the valuation was high.