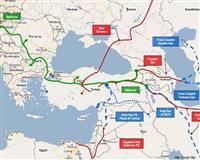 Vying to transport gas from Azerbaijan are the Austrian-led Nabucco consortium and the Interconnector Turkey-Greece-Italy (ITGI), as well as the Trans Adriatic Pipeline (TAP).

Officials at the European Commission are urging ITGI and Nabucco to enter talks about merging their operations, EU industry and political sources said.

"It's more straightforward to start with a small-volume pipeline like ITGI, and I know that these negotiations are ongoing because the Azeris are considering all options," said Jennifer Coolidge, at CMX Caspian and Gulf Consultants.

"The commercial reality is that either ITGI or Nabucco, or both together, but phased, could be feasible."

The European Union, home to 500 million consumers, has long been seeking to reduce its reliance on Russia, which provides about a quarter of EU gas needs, fearing that Moscow could hold Europe to ransom in any future political disputes.

Those fears were heightened by the 2008 war in Georgia and by a three-week gas crisis in 2009 after Moscow clashed with Ukraine, which transits Russian gas to Europe.

The EU's main means of diversifying its suppliers is by tapping into the Caspian region's massive gas fields, initially in Azerbaijan.

The consortium controlling the next wave of Azeri gas, from the Shah Deniz II field, co-led by BP (BP.L) and Statoil (STL.OL), is expected to decide on a buyer and transporter for its gas by June.

Europe's grab for Caspian gas gained traction in January, when the EU's energy commissioner Guenther Oettinger secured a major political agreement with the Azeri government to work together on the project.