A new home for the ‘crocodiles’ 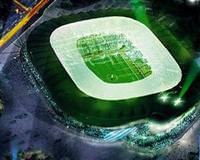 Uzunlar İnşaat has officially won the tender for the construction of league leaders Bursaspor’s new stadium, the ‘Timsah’ (Crocodile) Arena". The new stadium, which will have elements inspired by the crocodile figure, will have a capacity of 45,000 spectators.

While Bursaspor continues their pursuit of the top spot in the Spor Toto Super League, the tender held the day prior for their new Timsah Arena was won by Uzunlar İnşaat, who provided the lowest offer at 33,553,000 TL. Uzunlar İnşaat, which also worked on the Türk Telekom Arena Stadium in Seyrantepe in collaboration with Varyap, will commence construction on the Timsah Arena as soon as the tender is approved. The Bursa Metropolitan Municipality has been granted 49-years usage rights for the 64,000 square meter plot of land belonging to the Youth Sports General Directorate.
Timeframe of 450 days
Uzunlar İnşaat Executive Board Chairman Architect Numan Uzun, answered a series of question posed by SABAH, in which he stated that as soon as the tender process has been finalized, they plan to immediately embark upon building the new stadium. According to Uzun, they plan to have completed constructing the new stadium and have handed it over to Bursaspor within 450 days.
Uzun explains that 31 firms competed in the tender for the approximately 50,200,000 TL stadium project planned by the Bursa Metropolitan Municipality and that they provided the lowest bid at 33,553,000 TL, winning the tender. The official results of the tender will be announced to the public next week.
Reminding that Bursaspor continues to show success in the league, Numan Uzun states, "The entire nation is closely following Bursaspor and their passionate supporters. We want to repeat the success we experienced with the Seyrantepe stadium with the Bursa Timsah Arena. Everyone should be assured that we will be bringing on our experience to this new stadium construction."