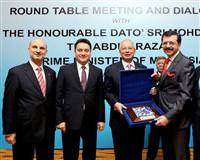 With morale low due to the uprisings that have transpired in North Africa and the Middle East which are one of Turkey’s highest regions of trade, good news from Malaysia has brought spirits up in the business world. The developing relations between the two nations have transpired into billions of dollars worth of agreements during a meeting participated in by Malaysia’s Prime Minister.

The 'new market' strategy implemented by the Turkish economy in recent years is beginning to reap benefits. Asia's rising star Malaysia has made the Turkish business world smile in this ever so trying time when tension has reached a peak in North Africa and the Middle East. Businessmen from the 200 million populated nation as well as others from the Far Eastern market have provided business opportunities in the billions.
Two days ago, upon a visit to Turkey by Malaysian Prime Minister Necip Abdülrezzak, a decision was reached to lift visa regulations and to sign a free trade agreement. Also discussed was the potential of joint car production and a roadmap for billions of dollars of investment plans by Turkish companies in Malaysia.
JOINT AUTOMOTIVE MANUFACTURING
A Foreign Economic Relations Council (DEİK) meeting held by the Turkish-Malaysian Business Council in collaboration with TOBB, had Malaysian Prime Minister Necip Abdülrezzak and State Minister and Deputy Prime Minister Ali Babacan participating in a round table discussion.
During the meeting, Malaysian Prime Minister Necip Abdülrezzak noted that it could be time to start thinking about embarking upon a joint initiative in the automotive sector in order to manufacture a Turkish-Malaysian model that could also be exported to other countries.