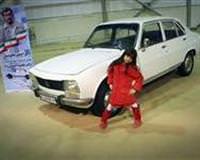 A 1977 Peugeot sedan belonging to Iranian President Mahmoud Ahmadinejad was sold for $2.5 million on Tuesday in a charity auction, Iranian media reported.

Ahmadinejad announced last year he would put up the vehicle for auction and donate the money to a housing project for low-income families. A multilingual website was designed to receive the bids.

"President Ahmadinejad's Peugeot 504 was sold for 2.5 billion tomans ($2.5 million) to an Iranian who took part in the auction," Isna news agency reported.

"After Iran, most visitors of the website were from America," it quoted the head of Iran's Welfare Organization as saying at a ceremony to hand the car key to its new owner.

Ahmadinejad, a blacksmith's son, has championed Iran's devout poor, especially those in rural areas, who felt neglected by past governments and helped sweep him to power in 2005.

According to the media, Ahmadinejad used to drive the white Peugeot when he served as the mayor of Tehran before his first term as president. The car would normally be worth around $2,000 on the local market.