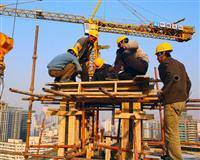 Britain's Costain Group Plc is the likely target of Renaissance Construction, as the Turkish building group seeks a partner with deep roots in high-potential markets.

Board chairman Erman Ilicak said last month that Renaissance, one of Turkey's three largest construction groups, was in early-stage talks to take a controlling stake in an unnamed, 140-year-old British company.

The detailed description, analysts say, points squarely at Costain: "It's difficult to come up with too many more suggestions (other than Costain)," said Panmure Gordon analyst Andy Brown.

Brown said the "bid shadow" of Renaissance could also explain Costain's reluctance to go hostile in its pursuit of Mouchel.

One wrinkle, however, is a gap in valuation: Costain's market value is about 150 million pounds ($245 million), compared with a 300 million euro ($417 million) value cited by Ilicak.

Even adding a typical takeover premium of about 30 to 40 percent, Costain's equity value would be some way below that. In "enterprise value" terms, the gap is even bigger, since as of November Costain had more than 100 million pounds in cash.

"Everything points to Costain except the valuation," said Robin Hardy, an analyst at Peel Hunt, saying it would be a "fairly punchy" deal.

Costain declined to comment, as did its two major shareholders, Kuwait's Al Kharafi and UEM Builders, a unit of Malalysia's UEM Group, which each have stakes of about 22 percent.

Any eventual deal would allow Renaissance to build on Costain's track record and established relationships in what could be lucrative markets. About $4.3 trillion will be spent on construction across the Middle East and North Africa over the next decade, PwC forecasts.


"The brand is important," said Hardy at Peel Hunt. "Costain gets to work in areas that you wouldn't expect a company of its size to get work in, simply because of the reputation from years past.

It worked on a 1970s boom in the Gulf, particularly the United Arab Emirates (UAE); helped develop Abu Dhabi's Das Island; and has a strong presence in the emirate after working on several large oil and gas projects.

"Some tenders have prerequisite conditions that demand having taken part in similar projects before. That's why we are interested in old firms in Europe," Ilicak said, adding the target had participated "in many important projects."

Renaissance has already created a jointly owned Middle Eastern venture with Porr of Austria, after snapping up a 10 percent stake in Porr two years ago. It said recently it wants to increase its stake.

Kharafi and UEM bought their stakes in Costain more than a decade ago. The business nearly collapsed after spiraling losses in the late 1990s, and undertook a 60 million pound rights issue in 2007.