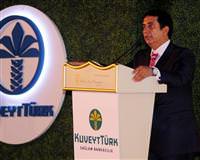 Kuwait Finance House's Turkish unit will launch a $500 million Islamic bond by the end of the year, its chairman said in a statement on Tuesday.

The Kuveyt Turk sukuk fetched a yield of 5.25 percent and was oversubscribed by investors from the Middle East, Asia and Europe.

Al-Omar said he expects more wide scale issuance from Turkish companies as the government made moves to accommodate Islamic instruments.

Last year, the Capital Markets Board of Turkey (SPK), the regulatory and supervisory authority in charge of the securities markets, published a statement setting the legal ground for sukuk issues by Turkish companies.

Turkey, which is careful to preserve its secular stance on politics and finance, refers to sukuk as participation certificates and Islamic banks are called participation bank.

The country is increasingly being seen as a growth market for Islamic finance, bolstering its ties to the oil-rich Middle East.

In January, Turkey's Istanbul Stock Exchange launched an index comprised of 30 listed companies that comply with Sharia banking principles as the country seeks to attract interest in its burgeoning Islamic finance sector.