Sarkozy pays the price in satellites 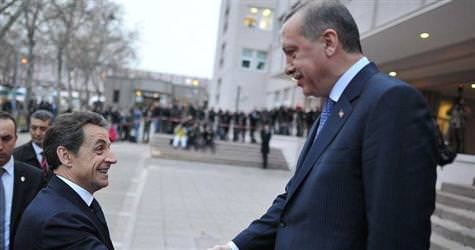 The secret behind Sarkozy’s lightning-speed trip to Turkey has been uncovered: when a French firm did not win Turkey’s satellite tender, Sarkozy’s scheduled two day trip was cut down to just six hours.

It turns out; Turkey's satellite tender is the reason behind why French President Nocolas Sarkozy chose to come to Ankara for just six-hours under the G-20 Chairmanship. The developments that led to Sarkozy's concise trip are as follows:
FRENCH FIRM LEFT OUT OF TENDER
Turkey did not invite France's Alcatel, despite 18 years of partnership to join in Turkey's tender for the new Türksat 4A and Türksat 4B satellites. France was therefore, left out of the running for the 571 million-dollar project.
HEAVY BILL TO SARKOZY
Ankara therefore put the price up high on the French President who has in the past openly voiced his opposition to Turkey's EU membership. Ways have parted due to Sarkozy after an 18-year partnership with France which not only resulted in the development of Turkey's four satellites, but also in sending them into space.
Japanese firm Mitsubishi came out the victors of the satellite tender…
The price of Sarkozy's Armenian allegations and voiced opposition to Turkey's EU membership has been paid high. Turkey has abandoned the French firm Alcatel after 18-years of partnership and has selected Japan's Mitsubishi to be their new partners in satellite production.
Turkey is reassessing economic relations with France, which has notoriously been problematic for the nation in terms of diplomacy. The negativity which has developed in relations due to France's acknowledgement of an Armenian 'genocide' as well as their establishing regulations against denying it is such as well as Sarkozy's voiced opposition to Turkey's EU membership has reared its ugly head in Turkey's recent satellite tender. France's Alcatel, which has sent four satellites into space for Turkey thus far, was not invited to join in the Türksat 4A and 4B satellite tender. As the 18-year partnership between France and Turkey comes to an end, thus begins a new union with Japan.

A tender was held in September 2010 for the manufacturing of Turkey's new satellites Türksat 4A and 4B. Global front runners in satellite production such as Japan's Mitsubishi, the American company Lockheed Martin and Orbital, English companies Telesat and Astrium were invited to join the tender. The day prior, Minister of Transportation Binali Yıldırım announced that after evaluating the proposals submitted, Japan's Mitsubishi came out the victors of the tender. While an agreement is being signed between Türksat and Mitsubishi, the satellite's orbit has now switched from Europe to the Far East.
JAPANESE TO TRAIN TURKISH ENGINEERS
What put Japan Mitsubishi ahead of the American and British companies that participated in the tender was the proposal to not only train and share information but to also open the doors to Japan's Aerospace Exploration Agency (JAXA) to Turkish engineers. Also, Turkey will collaborate with JAXA in founding and operating Turkey's Space Council. Furthermore, in addition to working on satellite and space research, Turkey also plans to collaborate with Japan on nuclear power stations.
POOR TREATMENT WAS THE LIMIT
In 2001 and in 2008, the French-made Türksat 2A and 3A satellites, respectively, were sent into space. During the production of the 3A satellite, 22 engineers went to France for training and to survey the satellite's production. While in France, the Alcatel firm directed a negative attitude towards the Turkish engineers present. They did not allow the Turkish engineers to participate in the satellite production whatsoever and only allowed them to be present as observers. This stance displayed by Alcatel's was what made relations reach their final limit.
Therefore the 18-year partnership shared between France and Turkey in the making of four satellites came to an end. With the partnership to be established with Japan, the satellites which will be produced in Turkey, the Türksat 5A in 2015, the Türksat 5B in 2017 and Türksat 5C in 2019'will all be sent into space. Therefore with Turkey's fleet of seven satellites the areas covered will include South America, Eastern North America, Europe, Asia and all of Africa. This translates to coverage of 91% of the world's population. Furthermore, Japan's assistance in allowing Turkish engineers to physically participate in production as well as their will contribute greatly to Turkey's being able to make satellites on their own in the future.
Alcatel's omission angered…
It has since been learned that Alcatel's omission from the 571 million dollar worth satellite tender was influential in Sarkozy's decision to conduct a six-hour trip to Turkey as G-20 Chairman and not as France's President, which took place two weeks ago. Sarkozy's short-lived trip was widely criticized in Turkey as well as by Prime Minister Recep Tayyip Erdoğan.