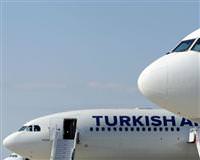 The airine ordered 10 A321 single-aisle passenger aircraft worth $1 billion at list prices and three A330-200 freighters worth 600 million.

The order added evidence of an upturn in demand on a day that Boeing sealed deals worth $10 billion with two airlines in China, the world's fastest growing market that is likely to buy more than 2,000 aircraft over the next five years.