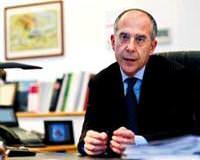 It marked the first time a large foreign firm committed to tapping into that nation's geothermal reserves. But local experts say it could be risky business even for an energy pro like Enel, in part because in Turkey many government permits for geothermal drilling contain no geothermal assets at all.

Will Enel be a successful pioneer in what some experts in Turkey say is a poorly managed sector?

Under their agreement, permits were transferred to Enel at a "nominal cost" so the firm could fund the exploration, said Ruggero Bertani, manager of Enel's geothermal business development.

"Turkey is a key country in terms of the energy business, and with a good geothermal potential," he told SolveClimate News in an interview, adding that Enel expects the venture to yield about 100 megawatts of new capacity.

The Turkey Geothermal Association projects that geothermal electricity production will reach 550 megawatts in Turkey by 2013, up from the current level of about 100 megawatts, while others say it will be closer to 600 megawatts.

According to some professors and geothermal engineers, however, these estimates are far too optimistic.

Are All of Enel's Exploration Licenses Legit?

Not only is Turkey's geothermal energy potential often exaggerated, they say, but the government agencies in charge of managing the resource have made some poor decisions about the way they award licenses to geothermal developers.

As a result, some geothermal resources have been improperly exploited, while others have been divided between licenses held by two different companies, spawning lawsuits. Worst of all, many exploration licenses — perhaps even the majority — don't contain any geothermal potential.

Enel's Bertani declined to discuss the issue, and the CEO of Meteor refused to give an interview about the deal because it is still in its early stages.

Tahir Öngür, a geological engineer with the Turkish engineering and consulting company Geosan, said he has a bad feeling about the permits.

"More than one and a half years ago, I had a chance to see the list of these exploration licenses," he told SolveClimate News. "My impression was negative about their worth for investigation. Of course, it is necessary to discuss these locations with more detail before making more serious decisions."

Umran Serpen, a professor in the petroleum and natural gas engineering department of Istanbul Technical University, also said he is refraining from judgment until more is known about the sites. "I will not say that somebody is cheating Enel. Enel is not a company to be cheated. But it's a risky business, and we'll see the results."

For Turkey, the stakes are high. Undoubtedly, the outcome of Enel's exploration project will influence how other major foreign companies approach geothermal development there.

Turkey's geothermal resources — pockets of thermal energy trapped beneath the Earth's crust — have a proven potential capacity to supply some 800 megawatts of electric power and 22,000 megawatts of direct-use heating, according to an unpublished PhD study in Serpen's department at Istanbul Technical University.

The potential for electric power is so much smaller because power generation requires extremely hot reservoirs of thermal energy, upwards of 284 degrees Fahrenheit. In fact, of the 122 known sites surveyed in the academic study, only 25 were hot enough for power generation, said Serpen.

"All 25 resources have owners. There might be five or so more, but not many more," Serpen told SolveClimate News. "At this point, we know where all the geothermal power resources in Turkey are."

According to Serpen, in order to identify those sites, Turkey's General Directorate of Mineral Research and Exploration (MTA) has used a method similar to the so-called "volume method" that is employed by the U.S. Geological Survey.

Based on this information, the goal of reaching 550 or 600 megawatts in the next few years appears less likely.

"It seems optimistic," said Abdurrahman Satman, another professor in Serpen's department. Increasing the supply by "200 to 300 megawatts could be possible, if project development plans and investments are provided," he said.

Years of Corruption and Wasting the Resource

Hopeful investors and developers of Turkish geothermal sites got their first nod from the government back in 2007, when the Turkish parliament passed a law giving joint control over geothermal development to three government agencies: the MTA, the Ministry of Energy and Natural Resources, and the General Directorate of Mining Affairs (MIGEM).

About 3,200 exploration licenses have been issued since the law was passed.

Tevfik Kaya, Turkey's coordinator for geothermal electric power at the European Geothermal Energy Council, said that geothermal development activity is currently spiking because each exploration license is valid for just three years — the amount of time since the law passed.

"After the geothermal law was established, many serious investors in Turkey started to get involved. We are expecting more than twenty geothermal wells to be drilled under geothermal licenses this year," he said.

Even before the 2007 law, which sets guidelines for how geothermal resources should be developed, the MTA would routinely sell off geothermal wells that it had drilled without exploiting. Though many of these had sufficiently high temperatures for power generation, most were turned into direct-heating facilities, Serpen said, effectively wasting the resource.

The geothermal law required applicants for licenses to go through local governments in the region of their interest, who would then report the license to MIGEM. Many private companies and individual speculators got licenses this way. But a lot of licenses still ended up with the MTA itself.

According to Serpen: "Since the MTA knew exactly where the resources were, they went to apply for all those areas. They exerted some political pressure and they did not permit others to apply for areas of their interest."

"Before Enel, there were no big, serious, foreign companies in Turkey," said Kaya.

"When we talk to them in international meetings, they say the prices are too high to let them enter. They do not see the feasibility," said Serpen, who attended a workshop on geothermal reservoir engineering at Stanford University last year.

In part, that may be due to the inflated prices of the licenses.

Because of its large holdings, the MTA is able to charge millions of dollars for the rights to some licenses, even when their real value is unclear. At the beginning of February, for example, an auction ended for a collection of 22 licenses whose starting bids amounted to just under $1 million.

Foreign investors have also likely been deterred by the skimpy price guarantees for geothermal energy in the country.

For a time, the resource was a profitable and cooperative way for residents of rural districts in Turkey to heat their homes.

Now, the far cheaper option of natural gas is available in every part of the country. As early as 2005, a paper by Serpen and his colleagues remarked on the poor planning and the "extreme technical and economic problems faced by the owner and operator" of many geothermal district heating systems.

For geothermal developers, however, there is still hope.

In 2009, Enel held preliminary talks with another Turkish energy company, Deka Enerji, about investing in geothermal power together. Nothing came of it, though — possibly because the financial incentive was too paltry.

"The news was that Enel canceled their attempt due to early distribution of the information to media by counterparts," said Öngür. "But it looked like there must have been more serious reasons, related to the commercial base."

"The new law and the new tariff represent an opportunity," according to Bertani. If Enel's exploration yields positive results, electricity "will be our major target," he said.

Whether the exploration does yield positive results, however, may be a big "if." Of those 3,200 geothermal licenses that were sold after the 2007 law, the majority are devoid of geothermal reservoirs, according to Öngür.

"Most of the geothermal licenses that currently exist in Turkey do not contain any geothermal resource," he said. "For example, license owners such as BM, Sakir Guzel, most of Derin Geothermal, Kayan [and others] have plenty of licenses which are clearly empty."

Serpen said over the past few years, some of the owners of these dud licenses have asked him to evaluate their real worth.

"I remember when a big company once came to us to ask about their eighty geothermal licenses," he recalled. "We investigated those licenses, and we found that only one of them was worth exploring. The director was really surprised and disappointed. He asked us, 'How can this happen to us? We're working with three hundred engineers.'

"He didn't believe us, so he went to another university and found out that we were telling the truth."

Serpen estimates that only three or four hundred of all 3,200 licenses are worth anything. It is not the fault of the companies, local governments or even the MTA, he said, but rather individual consultants who give geothermal speculators bad advice about which land to buy.

"I don't know whether Meteor has these sorts of licenses, consciously or unconsciously," Serpen said. "They might have them and not be aware of them."

Unlucky geothermal developers in Turkey can also find themselves holding a license that only gives them the rights to part of a reservoir, with the rest in the possession of a different company. In such situations, "those companies fight and sue each other over who has the rights to the single resource," said Öngür.

One of the 22 licenses sold in the recent auction by the MTA was an example of this, he continued. The license contained the Aydın-Yılmazköy geothermal field in western Turkey, and was the subject of a recent court case in Aydın because of the piecemeal way it had originally been auctioned off.

"When MTA auctions off some of their resources, they divide the resource deliberately, just to make more money," said Serpen. He and his colleagues are currently tackling this very problem, in a paper about how to unify energy resources that have been cut up and sold separately.

"We are studying cases in the United States, in the oil and gas business as well as geothermal, and trying to tell people here what can be done."