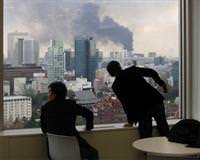 Ever since the 1999 Marmara earthquake, the Natural Disasters Insurance Association or DASK, has acquired a five billion lira budget, making it one of the world’s largest insurance funds.

Following the recent earthquake in Japan, debate of an impending earthquake in Istanbul has also resurfaced. According to a DASK report, should 'the big one rattle the city, 99.7 percent of the population will not be killed, however hundreds of thousands of homes will be destroyed.
According to DASK Executive Board Member Okan Utkueri, the most important thing is returning to normal life after a natural disaster. According to Utkueri, in 2010 3.4 million properties were insured and this year, they hope to bring that figure up to 5.5 million.

Utkueri goes on to state that they have paid out almost 21 million lira in compensation for damages incurred from over 300 earthquakes in the past 11 years. According to Utkueri, The Bolu province comes in number one in terms of earthquake insurance with the Marmara region also taking the top. Utkueri explains that for just 14 liras a month, it is now possible to be insured against a possible earthquake.