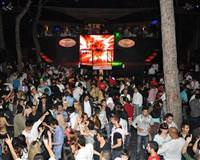 Mustafa Akdoğan has designed a soundproof booth for partiers out at bars and discos to use if they want to call home. The booth shuts out all external noise and provides sound options such as traffic or being at a meeting as background noise.

Cellular phones have become indispensible for all of us, however to that end; we all share the same problem of talking in loud and crowded spaces, or better put, not being able to talk in crowded or noisy places…
Then there is also the added difficulty of the person on the other end of the line hearing exactly where you are due to external noises. For example, a telephone call which comes in as you are dancing at a nightclub has forever been a nightmare. Especially so, if the person calling is not supposed to know that's where you are.
You push through the crowd to throw yourself outdoors or to the bathroom to be able to take the call. However, you still can't escape the background noise. Well, our young entrepreneur Mustafa Akdoğan and his company İdenova have come up with a solution. After two years of research and development studies, engineers at the firm have designed a 'silent room'. However, Akdoğan and his team took the concept even further. If desired, those using the booth can select from a variety of background noise options. For example, if your excuse is that you are in the hospital, the booth offers the option of hospital background sounds. Or, let's say you have told the person on the other end of the line that you are watching the stars then the booth provides the background noise of crickets. If one says they are at a football game, then the background sound can be adjusted accordingly. Therefore with this newly designed booth, it is now possible to hold sane telephone conversations from such wild locales as nightclubs, airports, concerts or matches.
Akdoğan noticed the demand for such a product as he witnessed countless partiers forced to leave clubs to find quiet places to take telephone calls. The İdenova firm has patented their invention, which includes sound isolation, LCD screens, air conditioning and a sterilized environment, as well as an interactive screen and effects applications.