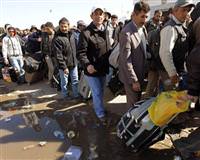 Turkey's construction companies, having reaped rewards from their go anywhere attitude, are now paying a price for their risk, leaving unfinished projects behind in Libya after pulling workers out.

"We are facing a risk which didn't exist before and now everybody is going to start separating their eggs in the basket," Ersin Takla, chairman of Turkish chapter, Turkish-Libyan Business Council, told Reuters.
Measured by order books for overseas projects, Turkey's construction sector overtook the United States' in 2010 to become the second largest after China's, according to Engineering News Record contractors survey.

Coming from a fellow Muslim country that has deep-rooted historical and cultural ties, and whose government doesn't carry the baggage that Western governments do, Turkish firms have operated in the Arab world with a greater comfort level.

"From Morocco to Egypt, Turkish firms are in the foreground compared to Western companies, because they can take risks which Western companies cannot take," Erdal Eren, head of Turkish Contractors Association, said.

But the equation, he added, has changed.

As Libya descended into violence, Turkey mounted a mass air and sea evacuation operation to bring home most of some 20,000 Turks working there.

One didn't come home alive. Yunus Emre Celik was shot dead as he climbed a crane at a building site near Tripoli on Feb. 22.

Burcu Begde, an employee of a construction firm which was building a university in Benghazi, spoke of the toll stress had taken among those who'd been evacuated from Libya.

"All of our colleagues are back from Libya, and physically they are fine, but everybody is questioning their lives. I broke up with my fiance," Begde told Reuters more than two weeks after reaching home.

She said other colleagues' relationships had suffered too, but people were also worried about money and their jobs.

"Our company fired a lot of people today," she told Reuters on March 11. "They are sending some of the employees to Kazakhstan and they plan to go to Venezuela.

Begde said she had now been offered a job by a Qatari investment firm to work in Tajikistan.

"A period of instability has started in an important market for both construction and exports. Trade relations are going to lag for a while. We are worried in that sense," Eren said.

The unrest in Libya and elsewhere in the region highlight the dilemmas regional powerhouse Turkey faces as it expands its foothold in unstable neighbourhood.

Most recent data, which is for 2009, showed African countries, mostly the Arab North African states, accounted for 36 percent share of total overseas projects awarded to Turkish firms in 2009 while 32 percent came from the Middle East.

Libya, which had been part of the Ottoman Empire until Ottomans lost the province to Italy in the early 20th Century, has been a leading customer.

The armed revolt there has left the fate of contracts and machinery worth billions of dollars up in the air, and businessmen waiting to see who emerges in control.

Officials estimated Turkish companies had projects worth $15.3 billion in Libya since 2007, many of them still ongoing.

"We will need to discuss from now on what will happen after the storm in Libya -- whether the investments will continue or not," Umit Ozdemir, vice chairman of Tekfen Holding (TKFEN.IS: Quote).

The group's unit Tekfen Insaat, according to a Deloitte survey, was Turkey's third biggest construction company by revenue as of the end of 2009.

One of some 200 Turkish construction firms active in Libya, Tefken was running a $550 million project there to build a water conveyance system. Ozdemir said Libya accounted for 7 percent of Tefken's portfolio and did not represent a big risk by itself.

Investors are more nervous however, and since Feb. 21, the first trading day after a weekend that saw Libya unravel with alarming pace, shares in Tekfen Holding have tumbled 14 percent.

Shares of TAV Holding, which has units doing business in Libya and Tunisia, fell 7.4 percent in the period. "The contracting segment carries a big risk as the whole region is under risk. Tekfen's 63 percent of total backlog is in North Africa and Middle East region," said Gokhan Canitez, an analyst at Tera Brokers, explaining the share's performance.
Trade Minister Zafer Caglayan has said firms will be compensated for losses resulting from the revolt in Libya, and the government has announced plans to postpone tax payments for companies doing business there, while encouraging banks to restructure loans taken by firms caught up in the conflict.

Meantime, contractors were seeking to diversify into markets like India, China and the United States, according to Caglayan.