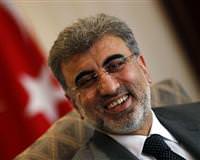 Turkish Energy Minister Taner Yildiz said on Thursday that approval for building a nuclear power plant, to be constructed with Russian help, may take 1-1/2 years following the earthquake and nuclear crisis in Japan.

Turkey's first power plant is to be built in Mersin by Russia's Rosatom on the Mediterranean coast.

"If we consider that the construction period is seven years, we will accelerate this as much as possible," Yildiz told Reuters in an interview. "2019 will be the year when we can use nuclear energy ... In 2023 we aim to be a Turkey with three (nuclear) power stations with 12 units."

Greenpeace has warned Turkey that it should abandon plans for nuclear plants, because its proximity to geological fault lines and vulnerability to earthquakes made the risks too great.

The minister said Turkey's nuclear plans would be reviewed to learn lessons from Japan's disaster in order to make the project more secure.

"Like every country, there are lessons which we should draw from the incident in Japan," Yildiz said. "But the issue must not reach the stage of 'Are you for or against?' nuclear power plants."

Japan's nuclear crisis prompted German Chancellor Angela Merkel to order safety checks on all nuclear plants and close the seven oldest for at least three months. Italy announced a one-year moratorium on building nuclear plants, and a number of other European nations from Finland to Switzerland turned more sceptical about nuclear energy.

Yildiz said that he hoped to complete talks with Japan for a second nuclear plant before the end of the year. Turkey is in talks with Tokyo Electric Power Co (TEPCO) and Toshiba on building a plant on the Black Sea coast.

Yildiz also said Turkish Petroleum would invest $5 billion (3 billion pounds) in Iraq as a result of tenders, which it has won. If the terms are right, the company will enter a fourth round of oil and gas exploration tenders in Iraq set for November, which include the Kurdish north of the country.