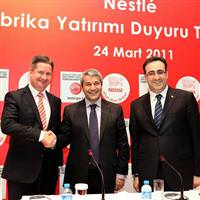 Nestle, the global food giant, has decided to bypass Poland and Russia to conduct a new investment in Turkey which they harbor a 102-year history with. In order to establish a breakfast cereal manufacturing facility on their property in Karacabey, Bursa, Nestle plans to invest 85 million lira and to provide 160 employment opportunities.
Participating in a press meeting, Minister of Industry and Commerce Nihat Ergün stated, "Nestle's decision to select Turkey, instead of Russia or Poland, openly displays Turkey's economic stability and growth potential."
FIVE BIRDS WITH ONE STONE
Expressing that the investment will be multifaceted, Ergün states: "This investment is not one where two birds are hit with one stone, it's the likes of which three birds, four birds or even five birds are hit all at once. Emphasizing that with this investment the types of Nestle products that are currently imported will from here on out be produced in Turkey and therefore imports will decrease which will allow for annual imports to reach the 16 million lira level.
Also noting that with the acquiring of raw materials from Turkey, a number of sectors will be positively impacted, Ergün states, "The fact that the production that will be conducted by the factory will require 15,000 tons of grains and 6,000 tons of sugar, which will be procured from Turkey, holds another level of significance. Turkey will become Nestle's production base for countries in the Middle East and North Africa."
NESTLE HAS 410 MILLION
Nestle Turkey's Executive Board Chairman Dr. Hans-Ulrich Mayer mentioned that a number of candidate countries competed for this investment, and stated, "After realizing 325 million liras in investments in Turkey over the past four years, we are proud to be making a new 85 million lira investment in 2011 in Karacabey."
Mayer also stated that Nestle Turkey's capacity has increased by 30 percent over the past three years and in 2010 they saw almost 20 percent growth.