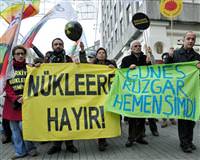 The proposed Akkuyu nuclear power plant, which sits on an active fault line and was first licensed in 1976, faces renewed opposition after Japan disaster

Turkey's first-ever nuclear power plant is about to be built in the Southeastern town of Akkuyu, more than three decades after the government first licensed the site.

But in the wake of the Japan crisis, opponents of the reactor are once again cautioning the government to drop the project.

"I'm not against nuclear power," said Tolga Yarman, a professor in the nuclear engineering department of Istanbul's Okan University, and one of the original nuclear engineers who signed off on the Akkuyu site license in 1976. "I'm simply against ignorant nuclear planning."

In explaining his reversal, Yarman told SolveClimate News: "The conditions of the area — as we know them — are completely different now, and new criteria have evolved."

The reactor, to be majority-owned by Russia's Rosatom State Nuclear Energy Corporation, would lie 16 miles from the Ecemis fault line where the Eurasian and African tectonic plates meet. When the license was issued in 1976, the fault was believed to be inactive. But studies published in science journals in the decades since have shown it to be active.

In a March 14 statement, a few days following the quake in Japan, Turkey's Chamber of Electrical Engineers condemned the Akkuyu plant because of the area's proximity to the fault.

Similarly, the government of Cyprus, the island country off the southern shore of Turkey, announced earlier this week that it would ask the European Union to stop Turkey from building the Akkuyu facility on grounds the earthquake risk is too great.

But the government's plans seem unlikely to change.

At a press conference on March 12, Turkey's energy minister, Taner Yildiz, said that construction in Akkuyu could begin in the next three months. This week, he stated the country "will accelerate" the estimated seven-year construction period "as much as possible."

Days after the Fukushima disaster, Prime Minister Recep Tayyip Erdogan confirmed to the press the country's commitment to build this first reactor, and said the nation would have three functioning nuclear power plants by 2023.

The Ministry of Energy did not return repeated calls and emails for comment.

In addition to the seismic risk, critics of the project are also taking aim at the choice of reactor type, the VVER 1200. It has never been built before, though versions of it are currently under construction at two sites in Russia. The VVER 1200 is third-generation technology and is generally considered safer than the world's current fleet of reactors.

The waste issue is another concern. Local observers say there hasn't been any clear explanation of how Rosatom will dispose of the radioactive byproduct generated by the plant.

"There is a belief that this area will become a nuclear dumpsite of Russia," Efkan Bolac, a lawyer from the town, told SolveClimate News.

Bolac said the cooling system is also sparking fears. Because the temperature of the Mediterranean Sea around Akkuyu is over 30 degrees Celsius (86 degrees Fahrenheit) in the summer, there are concerns that the seawater won't keep the reactors cool enough.

The coolant water could also damage the local environment when it is discharged from the plant after absorbing extreme heat from the reactors, he said. "It has been explained that the temperature of the sea water will be increased by 2 to 5 degrees Celsius. This will change the marine life of the region."

The shore near Akkuyu hosts a colony of Mediterranean monk seals and a very rare species of seaside daffodil.

Bukhovtsev deferred comment on the matters to Atomstroyexport, the Russian building company that will execute the actual construction of the plant. The firm did not return repeated requests for information.

A Route to Russian Energy Independence?

As a cleaner energy source than the coal- and gas-fired power plants that comprise about 80 percent of Turkey's electrical capacity, the government wants nuclear plants to take a large role in a carbon-constrained economy.

The project is also being touted as a way for Turkey to wean itself from energy dependence on its neighbors.

The Akkuyu plant would supply a massive 4,800 megawatts of electricity once completed, just over ten percent of Turkey's current installed capacity.

Turkey's energy ministry is also currently negotiating with Japanese companies to commission another nuclear power plant at the Black Sea town of Sinop, though no license has been issued for that site. Turkey imports almost all of its natural gas and about half of its coal, mainly from Russia.

Opponents say the Akkuyu project would do nothing to break that addiction.

The deal between Turkey and Russia ensures that Rosatom will control the Akkuyu plant from start to finish, and will be the majority shareholder in it.

"The Turkish government has essentially given the site to Russia," said Umit Sahin, a spokesperson for the Turkish Green Party. "The Turkish state doesn't have any authority to intervene in the operational or the building phase of the reactor. Even the control mechanisms are not clear in the contract. This is the first and only kind of direct build-and-operate agreement between the two states."

The deal also gave Russia a guarantee that Turkey would buy 70 percent of the electricity generated from the power plant, an unusually high guarantee, according to Bolac, the lawyer from Akkuyu."The public doesn't understand why a guarantee has been given that is higher than the rate in international markets. When people learn about this special privilege, they become suspicious," he said.

The government's attempts to auction off the construction tender for the Akkuyu plant failed during the 1980s and 1990s.

Then came Chernobyl. Enthusiasm for nuclear power dimmed among Turks after the 1986 disaster, which tainted harvests in northeastern Turkey for several years. The project lost even more supporters in 1998, after a 6.3 earthquake struck Adana, a city about ten miles from Akkuyu.

In 2000, as the government finally seemed on the verge of announcing which company had won the tender, then-Prime Minister Bulent Ecevit canceled the project for the ninth time under pressure from the public and the treasury, which refused to provide financial guarantees for the plant because it was such a risky investment.

"It was a big blow to the international nuclear establishment that Turkey didn't manage to build this reactor in 2000," said Melda Keskin, who led Turkey's energy campaign for environmental group Greenpeace throughout the 1990s. "The foreign companies had gotten an idea of what it was like to do business in Turkey, so they didn't come back."

When Turkey tried once again to auction off the tender to the site in 2009, no company made an offer except for the state-owned Russian company Rosatom, according to Sahin of the Green Party.

"None of the companies were interested in Akkuyu anymore, so the government decided to make it without a tender, with just a direct interstate agreement," he said.

Because the tender process was scrapped, Sahin explained, the building agreement between Turkey and Rosatom was not subject to any of the economic or environmental regulations that normally apply to power plant construction projects in Turkey.

"There is no law now about how this sort of nuclear agreement is supposed to be."

Will the Akkuyu Plant Get Built At All?

Earlier this year, a high court ruled that Rosatom must submit an environmental impact assessment report for the power plant to the Turkish Energy Market Regulatory Authority before Atomstroyexport can begin construction on the project.

Sahin hopes that public opposition to the plant will prevent this report from being accepted by the commission.

Yarman of Istanbul University is skeptical that the plant will ever be built.

The national election that will be held in Turkey this summer could deter the ruling party from trying to continue with the project, given that nuclear power is so unpopular across the country, he said. "They would only lose votes if they started right away; they would draw people's attention to all the problems with it."

"After recent developments in Japan, people's views about the power plant have changed, and worries about the security have peaked," he said. "Because of the environmental impact assessment report and the Ecemis fault line, we believe the power plant will probably not be built."