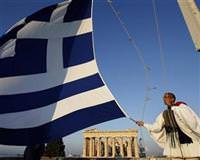 The downgrade by S&P, which cited risks that the countries' debts to a new European bailout fund would be repaid before bond investors, left Portugal's rating one notch above junk and Greece's creditworthiness below that of Egypt.

The downgrade hit the bonds of both countries -- two of the weakest countries in the euro zone. The yield on Portugal's 10- and two-year bonds jumped to euro lifetime highs, and the yield on Greece's two-year bonds rose 10 basis points to 15.46 percent.

S&P analyst Frank Gill said the downgrades came after the agreement by European leaders last week to replace the European Union's bailout fund with the European Stability Mechanism in 2013.

"Our view is that this really is a game changer," Gill told journalists.

"We do think it is clearly negative for holders of commercial debt, that is our view, that it will weigh on countries' capacity to serve their commercial debt," he said.

The downgrade of Portugal added to Lisbon's woes, just as the Bank of Portugal warned the country may need substantial new austerity measures to ensure it can meet budget goals.

Lisbon is grappling with how to regain investor confidence following the minority government's resignation last week after the opposition rejected its austerity plan in parliament, prompting many economists to predict the country will need a bailout soon like Greece and Ireland.

"Given Portugal's weakened capital market access and its likely considerable external financing needs in the next few years, it is our view that Portugal will likely access the EFSF and thereafter the ESM," Standard & Poor's said.

European leaders agreed a new package of anti-crisis measures at a two-day summit last week but delayed an increase in the size of the euro zone's rescue fund, known as the European Financial Stability Facility. However, they sealed a deal on funding the ESM, a new, permanent safety net that will become operational in mid-2013.

Portuguese Prime Minister Jose Socrates, who still retains full powers and is likely to remain as a caretaker premier until a new government is formed after an election, reiterated he had no intention of requesting an international bailout.

Socrates, who made no comments on the downgrade talking to reporters, attacked the opposition for rejecting his austerity plan and exacerbating the country's debt woes, urging it to come up with alternative measures to meet budget deficit goals.

"It is not enough for the parties to say they are committed to budget consolidation goals. It has been said many times. It is crucial that they say what measures they propose to get to this deficit. This would help the country," he said.

"The rating cut has been mostly priced in, but it's not just that," said Deutsche Bank economist Gilles Moec. "I think it's in Portugal's best interests to take a bailout soon rather than continue raising debt at much too high interest rates."

S&P downgraded Greece by one notch to BB-minus, deeper into junk territory, and below Turkey and Egypt, which are at BB.

"It is not a surprise as Greece was on negative watch," said analyst Ben May at Capital Economics. "Obviously, it is a reminder that Greece has lots of problems. We continue to think that a debt restructuring is likely."

Gill of S&P said the new bailout mechanism was also likely to impact the rating of Ireland, which has a grade of A-minus, three levels above Portugal.

The Greek Finance Ministry said S&P's downgrade was based on an erroneous evaluation of last week's EU summit decisions.

"It does not reflect the effort and success of the Greek economic policy program or Greece's economic prospects," the ministry said in a statement.

Earlier on Tuesday, in its spring economic report, the Bank of Portugal said there were risks of the country missing budget goals this year, adding that in 2012 the pressure for more measures could be greater, depressing the economy.

"In 2012 the additional, permanent measures necessary to reach the goal promised by the authorities reach a very substantial size," the bank said.

It forecast economic contraction of 1.4 percent this year and growth of 0.3 percent in 2012, but said those projections did not include likely additional austerity measures and economic deleveraging. The economy grew an estimated 1.4 percent in 2010.

Adding to Lisbon's and Athens' woes, there were new signs pointing to an increase by the European Central Bank in its main interest rate next month from a record low as the rest of Europe's recovery gathers steam and peripheral economies suffer.

"It is highly probable that there will be a change in interest rates in April, but it is not certain," said ECB Governing Council member Jozef Makuch.