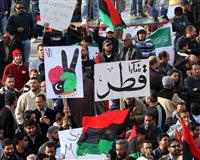 Qatar Petroleum is struggling to work out how to market Libyan oil on behalf of anti-government rebels a senior Qatar Petroleum (QP) source said on Wednesday.

A Libyan rebel official said on Sunday that Gulf oil producer Qatar had agreed to market oil from east Libyan fields no longer under the control of Muammar Gaddafi.

"The decision was just a political move and not something that we can do so easily or really fast because the ports are still in bad shape and no insurance company will be able to cover ships going there," said the source from QP who spoke under condition of anonymity.

He said the options for QP included buying the oil and reselling it or helping rebels load shipments and deliver them to Libya's customers.

On Monday, Qatar became the first Arab country to recognize Libya's rebels while a U.S. Treasury Department official said crude oil sales by rebels would not be subject to U.S. sanctions if they were not connected with Gaddafi government entities.

An official close to Qatar's government said that U.N. sanctions against Libya also made such a plan difficult, even if there was no intention to punish the rebels.

"The idea was to show the world that we are ready to help and support the rebels, the mechanism on how to do that is still under study," the official said.

Libya produced about 1.6 million barrels of oil per day before the crisis, or almost 2 percent of world output.

"This was just a gesture to show that we support the rebels and if the situation gets better we might not even do anything and Libya would be able to handle things," the QP source said.