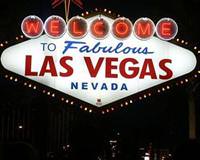 America's hardest-hit economy, Las Vegas, is finally showing signs of life because of an increase in tourism, according to a key barometer of economic activity.

The Center for Business and Economic Research, a think tank at the University of Nevada, Las Vegas said its index of the month-over-month increase was one of the highest in three decades.

Some 3.1 million people visited Las Vegas in January, an 8.3 percent jump from the month before, according to the report released on Monday.

Those visitors left $761 million in gaming revenue in January, a 3.76 percent rise from December.

"Nationally, the economy is starting to show some strength, so people have money to go to Las Vegas," Bob Potts, the center's assistant director, told Reuters.

Nonetheless, the report contains bad news for construction, once the area's second source of jobs.

"It's unlikely the construction sector will see much growth in the near future," Potts said.

All in all, the Las Vegas area may be adding jobs to its economy by year's end, the report said. That would be welcome, as Nevada has led the nation in unemployment rate for nearly a year. The unemployment rate in Nevada was 13.6 percent in February compared with the latest national unemployment rate of 8.8 percent.

But Potts cautioned that one month does not make a trend and another two to three months of growth are needed to assume Las Vegas is back to its winning ways.