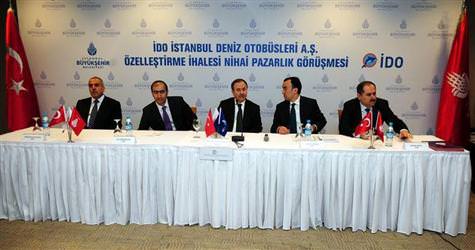 Final deliberations in the tender for the privatization of 100 percent shares of Istanbul's ferry company, İstanbul Deniz Otobüsleri Sanayi ve Ticaret A.Ş'nin or İDO, a subsidiary of the Istanbul Metropolitan Municipality, began today with a series of intense bids.

The highest bid received in the first non-elimination round was 502 million dollars.

In the second round, Yıldırım Holding was eliminated and the tender went on to an open bidding session.

In the open-bidding round Tepe-Akfen-Souter-Sera offered 760 million dollars and Global Liman requested a break.

Global Liman came back with a bid of 765 million dollars.

Koç-Stena dropped out of the tender.

Global Liman then withdrew from the tender.

The tender ended up going to the highest bidders the Tepe-Akfen-Souter-Sera Joint Venture Group at 861 dollars.

The privatization tender process for the Istanbul Metropolitan Municipality's İDO began on January 6th, 2011. On January 17th, the conditions of contract were put for sale. Those who wanted to participate in the tender purchased the specifications contract for 20,000 dollars and the last day to provide a bid was March 31st.

After today's final negotiations for the privatization tender, an application will be made to the Competition Board. Once the Competition Board has completed the permission process, the tender will then be presented to the Istanbul Metropolitan Municipality Assembly for approval. Following which the winner of the tender, will then sign a contract with the Municipality for İDO's shares.

The final amount designated in the auction bid will be payable in full on the day of the share transfer signing.