G20 to work on imbalances plan amid crowded agenda 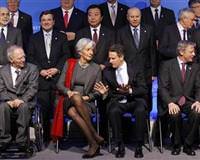 The world's biggest economies hope to make progress this week on a plan to identify countries that put the global economy at risk, while China warned against any moves that would curb its red-hot growth.

The meeting of the Group of 20 rich and emerging-market nations comes at a time of conflicting economic signals.

Just as signs of a strengthening recovery in some rich countries have pushed their central banks to begin to pull back on economic supports, world markets have been rocked by fears that high oil prices will put the brakes on global growth.

Finance chiefs from the G20 countries will try to advance a complex plan for better balancing the world economy, and avoiding the kind of imbalances that led to the financial crisis of 2008-09, when they meet on Thursday and Friday.

Crowding the agenda at the meetings in Washington will be concerns about oil prices and surging capital flows to emerging markets, both immediate threats to the recovery.

The G20, which includes rich and developing nations such as China, India and Brazil, agrees the world economy needs to be weaned from U.S. spending and that more demand must come from trade surplus nations, most notably China.

But agreement on how to achieve this better balance is proving difficult.

Ahead of the G20 meeting, China, the world's No. 2 economy, warned it would not let others create a "political tool" for curbing its economic expansion by trying to cap its hefty trade surpluses.

China is the country most often associated with excessive trade surpluses and has been criticized by advanced and developing economies for its rigid control over the value of its yuan currency, which holds down the cost of its exports.

As the G20 seeks consensus on how to lay a more solid foundation for long-term growth, oil prices are near a 32-month high and prices for other commodities, such as corn and gold, have hit records. And hot money flows into emerging markets have driven fears over the risk of asset bubbles.

Oil prices retreated on Tuesday as Goldman Sachs warned of a price reversal and the International Energy Agency said the high prices are beginning to curb economic growth.

France, the host of the G20 session, which occurs on the sidelines of semiannual meetings of the International Monetary Fund and World Bank, want to build on a hard-fought agreement in February on indicators for measuring global imbalances.

This time, French officials say the G20 should not only agree on how to identify those causing imbalances but also devise a way to red-flag those most responsible.

A senior U.S. Treasury official said the G20 hopes to make progress on guidelines for identifying imbalances this week and will soon be able to list countries with the biggest problems.

Progress has been slow. China in February refused to accept consideration of excessive accumulation of foreign currency reserves as an indicator of possible imbalances.

The U.S. official acknowledged the controversy around the process was a sign of progress that views are converging. "I think it is contentious because it is plowing new ground."

France hopes a road map encompassing not only the indicators to gauge imbalances but a means for applying them can be signed at a summit it will host in November.

The U.S. Treasury official cited a heightened awareness among Chinese officials about the need to rebalance its economy to rely less on exports and more on domestic consumption.

The Group of Seven club of developed countries meets on Thursday night and the U.S. official said they were likely to hold to their long-standing position that "excessive volatility" in currency exchange markets was unacceptable.

French officials also want to advance with rules for curbing volatility in commodities prices although officials said there was no likelihood of an agreement in Washington on a proposal to allow trading limits in commodities markets.

France, G20 chair this year, wants to make progress toward a code of conduct setting conditions for the first time on the use of controls to tame the type of hot money flows that are threatening to destabilize many emerging markets.

The IMF agrees that capital controls can be useful at times, but should be seen as a last resort. G20 members Brazil, South Korea and Turkey have used them and are unlikely to accept curbs that would limit their ability to do so again.

In a communique on Friday, the G20 is expected to say the recovery from the 2007-2009 financial crisis is intact despite damage from Japan's earthquake and political instability in North Africa and the Middle East, officials say.