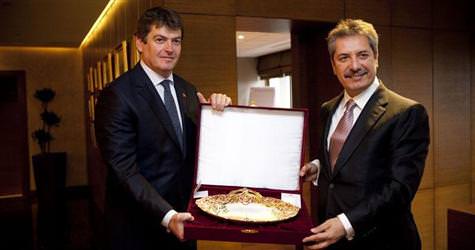 Albanian President Bamir Topi, has thanked Çalık Holding Chairman of the Executive Board Ahmet Çalık for the investments made in his country.

Describing Turkish and Albanian relations as being at 'the highest level possible,' Albanian President Bamir Topi says that in the future economic, social and political ties between the two countries will continue to be at the highest point.

WE HAVE A JOINT HISTORY
Expressing that for them the Turkish public is perceived as being brothers, Topi states, "We have a very long shared history. However, we have also always been together in modern times. Political, economical and social relations between our people have truly reached the highest level.

We are very grateful for the support always offered by Turkey regarding our full membership to NATO.

We also want to thank Turkey for the support they have given to Kosovo. Economic relations between Albania and Turkey are also advancing with speed. Çalık Holding is a very important establishment for us, and it has signed on to a number of significant investments in Albania. We are very pleased by these investments. I am sure that Mr. Ahmet is fond of Albania. The future of our relations will only get better and advance as they further develop."

ALBANIA IS LIKE OUR HOME
Ahmet Çalık, whose significant efforts President Topi attributes to raising relations between the two countries to the uttermost level, stated that when in Albania they feel like they are in their own home. Expressing that they have much trust in Albania's future, Ahmet Çalık went on to state, "We will continue to contribute to the development of friendly relations between the two countries and making investments that will gain momentum for the Albanian economy.

A 500 MILLION DOLLAR INVESTMENT
Up until now, the Banka Kombetare Tregtare (BKT), GSM operator Eagle Mobile and the landline operator ALB Telecom, owned by Çalık Holding, employs approximately 3,000 people. BKT, which is one of Albania's two largest banks, has assets totaling 1.65 billion dollars with deposits surpassing 1.45 billion dollars. With a total of 73 branches, 15 of which are in Kosovo, BKT has been assessed by the international crediting association JCR-Eurasia in the highest level investable category. JCR-Eurasia has issued BKT a long-term national note of "AAA(Alb)", categorizing the bank as 'stable.' The Banker magazine has twice named BKT "Albania's Best Bank of the Year".
I now have the key to the door…
Topi also jokingly referred to his recently being offered a key to the city of Bayrampaşa during his visit at Çalık Holding. "Whenever I come to Turkey, I feel at home. Now, something has changed. I won't even need to knock on the door because not I have the key." Topi was gifted a plate by Ahmet Çalık representing Istanbul and made by Yıldız Porselen.
Eagle Mobile increased revenue by 18% in 2010
With a 75 million Euros investment, Eagle Mobile, within just two years' time has acquired 880,000 subscribers in Albania which has a 3.2 million population.
Eagle Mobile, one of four GSM operators in Albania has increased their market share in terms of subscribers to 18 percent.
'We must reinforce relations further in foreign policy'
Pointing out the significance of collaboration between nations in Eurasia, Albanian President Bamir Topi states, "Cooperation in the area of energy is very important to establish peace and stability."
On the second day of the 14th Eurasia Economic Summit, organized by the Marmara Group, speaking at a session, Topi stated, "It is very important for us to sign on to collaborative efforts in security peace and the economy. Reinforcing relations with Turkey in foreign policy is one of our significant objectives."
Noting the improvements in the area of investments in Albania, Topi stated that their objective is to facilitate the flow of people, goods and capital between the Balkan national and to spread to Asia and Europe.