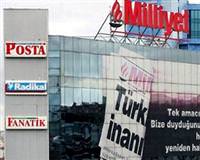 Demiroren-Karacan group will pay $26 million for Vatan newspaper and $47.96 million for Milliyet, Dogan Gazetecilik said in a statement to the Istanbul Stock Exchange on Wednesday.

Dogan Gazetecilik shares were up 14.3 percent after the news but by 1418 GMT had reversed direction to trade 5.3 percent lower.

The shares fell because the sale price of the newspapers was lower than Dogan Gazetecilik's market value, said analyst Hasan Sener at Oyak Securities. The newspapers make up the bulk of the company.

With the sale of Milliyet, the newspaper is back to its previous family owner.

Ali and Omer Karacan, who own the Number One broadcasting group, are the grandchildren of the founder of Milliyet, Ali Naci Karacan. Karacan sold the newspaper to Aydin Dogan in 1979.

The Karacan family has set up a partnership with Demiroren Group, which has interests in liquid propane gas and construction, to buy the newspapers.